Says She Ain't Got No Extra Hush Puppies to Sell

“A heaping helping of fried chicken, macaroni and cheese/And collard greens too big for my jeans/Smoke steams from under the lid that's on the pot/Ain't never had a lot but thankful for the little that I got.”

I spent 4th of July weekend in Atlanta visiting good friends from back in the day. For the better part of three days we never left the front porch of my friend Alex’s apartment in the Old Fourth Ward, save for trips to the grocery and liquor store. That is until Monday, when we embarked on a Goodie Mob-inspired tour of southwest Atlanta.

“I’ve been thinking about doing the Goodie Mob Soul Food tour,” Alex mentioned off-hand when I first arrived. “You know, checking out all the restaurants named in the song.” Genius. This idea demanded to be put into action.

“And Miss Lady acting like we in jail/Says she ain't got no extra hush puppies to sell/Bankhead Seafood making me hit that door/With a mind full of attitude.”

We feel you, Big Gipp. We too left Bankhead Seafood – or Bankhead Fish and Soul as it’s officially named – sans hush puppies. It turns out this tiny spot along Bankhead Highway is only open Thursday, Friday, and Saturday. We began to wonder how many of the soul food joints were going to be open on the Monday of a long holiday weekend, or how many were open period 15 years after Goodie Mob helped put the Dirty South on the map with its 1995 debut.

“It was a line at the Beautiful/JJ's Rib Shack was packed too/Looking to be one of them days/When momma ain't cooking/Everybody's out hunting with the family/Looking for a little soul food.”

We set course for the Beautiful, an Atlanta institution that was thankfully open for business. Piles of pork chops, beef ribs, and barbecued chicken lined the buffet-style counter but I opted for the fried fish I had been craving since Bankhead.

Topped with hot sauce the fish went well with the perfectly seasoned greens, rice, and shockingly buttery cornbread. Later we found JJ’s Rib Shack anything but packed. It sat dark and empty, a posted sign telling us to come back Wednesday.

A quick Web search indicated that the mystery address was clearly on a residential street but we decided it was worth a drive-by. The street bore no historical markers reading, “This house was referenced on a groundbreaking ATL hip-hop record.” Nope, just a quiet, tree-lined road with anonymous homes.

A quality photo proved elusive, as Alex was understandably leery of creeping past the homes of total strangers with a camera. As we rolled down the block a second time, the opening notes of “Cell Therapy” crawled through the speaker: “Who’s that peakin' in my window? Pow! Nobody now.”

Later that night I looked up the tax records to find that the property was sold 10 years ago and the owner’s name didn’t match any legal Goodie Mob monikers. I can only assume Khujo’s momma used to live here and worked the stove for amazing Sunday brunches.

“Hot wings from Mo-Joe’s got my forehead sweating/Celery and blue cheese on my menu next.”

Mo-Joe’s – or Mo-Better Wings as the sign read – sat shuttered in the parking lot of a strip mall along Lakewood Avenue. The phone number painted on the side of the shack went unanswered and no sign posted regular hours. We didn’t end the Soul Food crawl as stuffed as anticipated (a trip to Fat Matt’s Barbecue would fix that), but the tour offered a window into the old stomping grounds of one of the best rap groups to ever come out of the South. Next year we'll know to do it on a Saturday.

"Everythang that I did/Different things I was told/Just ended up being food for my soul." 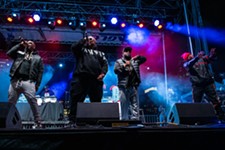