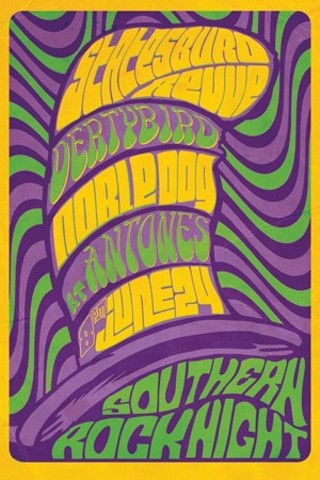 There’s still a version of Lynyrd Skynyrd out there and the Allman Brothers Band and ZZ Top continue to tour. Meanwhile, yelling “Free Bird” at shows, ironically or not, always gets a chuckle. Then there are bands like the Black Crowes, Widespread Panic, and the Drive-By Truckers who revel in their Southern roots.

Locally, a loose amalgam of long-haired blues, boisterous country rock, and lengthy guitar jams seems to be on the verge of a resurgence. The hands-down leaders are Uncle Lucius, whose Pick Your Head Up was one of my top listens of 2009. They’ve recently released Live at the Saxon Pub, where the quartet’s splendid songs and superior ensemble play are showcased in front of a raucous crowd.

Tomorrow night, Antone’s offers a good opportunity to discover other new bands with a similar vibe. Among them, Dertybird is the most name-checked of the three. Their disc, Pure Analog, and the one show I caught hewed a little too close to Black Crowes territory with little originality, but their enthusiasm for the genre is unmistakable.

Most intriguing is Stewart Mann and the Statesboro Revue. Their claim that “We just want to bring back old school rock ’n’ roll and do away with modern day rock ’n’ crap” made me laugh in hearty agreement. Noble Dog, a duo that's shared a stage with the aforementioned bands, has been gigging around town for the last year or so. They close the night with an unmistakable Texas influence.

Finally, I need to mention Wisebird, who wildly impressed me with a recent set at Momo’s. Originally from Salt Lake City, this now-Austin-based foursome is on the road nearly constantly, so local appearances are rare. Already recognized as up-and-comers on Jambase, they stop at the Continental Club on July 8, when their mix of Allman Brothers sprawl and Little Feat funk is likely to shake some butts and explode some heads.