See You On the Moon

Shel Silverstein gets a tribute, plus more new albums In the age of the mp3, tribute albums have gone the way of the CD. That hasn’t stopped Bobby Bare Sr. and Jr. from producing one of the most delightful tributes of the year, Twistable Turnable Man: A Musical Tribute to the Songs of Shel Silverstein (Sugar Hill).

The Bares were lucky enough to call Silverstein a friend and the love shows, although it doesn’t hurt that he wrote some of the most memorable story songs of the past century. Venerable old voices like John Prine, Kris Kristofferson, Lucinda Williams, Nancy Griffith, and Ray Price mix with hip new ones such as Andrew Bird, My Morning Jacket, Dr. Dog, and Sarah Jarosz, each tackling tunes like “A Boy Named Sue,” “Queen of the Silver Dollar,” “The Cover of the Rolling Stone,” “The Unicorn,” “Sylvia’s Mother,” and “The Ballad of Lucy Jordan." Silverstein, who passed away in 1999, was also an acclaimed screenwriter, cartoonist, and author of children’s books, so if this gets people to find out who he was outside the music, it will be successful beyond its means.

With her third album in as many years, Tift Merritt seems to be back on track after spending the first part of this decade seemingly dormant. See You On the Moon (Fantasy) is bit more introspective than some of the North Carolinian’s latter work, but those who enjoy her quiet side will find a lot to like.

She’s even a bit adventurous, exposing a soulful edge with slinky set opener “Mixtape” and a dynamic cover of Emitt Rhodes’ “Live Til You Die.” Her version of Kenny Loggins’ “Danny's Song” can’t escape its treacle, although stylistically it fits with tunes “Like the Things That Everybody Does” and the title cut. Still, Merritt remains one of Americana’s treasures and her large local fanbase is sure to join her on the moon sometime soon.

The Pernice Brothers have become unstuck in time and their latest, Goodbye Killer (Ashmont), proves it. Filled with jangle and bits of alt.country, it’s like a postcard from the early 1990s, when the term "indie" actually meant something. Songwriter Joe Pernice reaches for some curious subject matter, singing about writers Jacqueline Susann and Ford Maddox Ford and filmmaker Leni Riefenstahl, while also drolly claiming “We Love the Stage,” a bit of vaudeville with a two-stepping beat. Elsewhere, he’s as downhearted as ever, offering “The Great Depression” and the deceptively shiny “F*cking and Flowers." Recommended for those who like their pop vexing and radiant.

Pop country has left me disheartened, but one of its leading lights just issued what is being hailed as the country album of the year, and I can’t quite say I disagree. Dierks Bentley’s Up On a Ridge (Capitol) takes all sorts of risks, including being bluegrass-based. Marty Stuart could pull this kind of disc off in his sleep, but Bentley gathers some of the day’s best pickers, including Chris Thile and his Punch Brothers, the McCoury Brothers, and a host of special guest vocalists including Vince Gill, Alison Krauss, Kris Kristofferson, and Del McCoury for an effort that seems sincere.

Among those risks is covering Bob Dylan’s “Senor (Tales of Yankee Power)” and U2’s “Pride (In the Name of Love),” the former with a little more success than the latter, mainly because, although the arrangement of “Pride” is remarkably true to the original, the transformation ultimately comes across as unnecessarily forced. There are hints of that pop style here and there, but the bluegrass moments are divine and, sincere or not, Bentley scores points for at least attempting to grow. 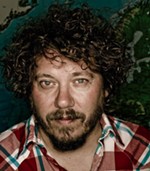 10 Minutes with Bobby Bare Jr.
‘I think most great songs are waiting around to be written’