U21 bands win big in the Music Poll. What does it mean to this generation? 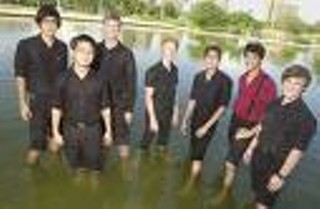 Some of Mother Falcon's flock (by John Anderson)

The 2009-2010 Austin Music Awards are out, and Austin's next wave of talent stood side by side with the best of the best. In each genre, young bands who have been working hard to get their names out are finally getting recognized.

Electro-pop bandits Speak came away with Best New Austin band. If I had to put money on which of these bands was going to get big first, it would be these guys. Already on Playing in Traffic, the same label as Los Lonely Boys, they are pioneering a new brand of super fun pop music, as heard on debut EP Hear Here.

Bright Light Social Hour is one of the hardest working indie bands in Austin. I’ve been lucky enough to see them go from winning the battle of the bands at the Red Eyed Fly to their victory at the Sound and the Jury competition, which earned them a slot at last year's Austin City Limits Music Festival. Bright Light continues to get better and better, and I wouldn’t be at all surprised if they grew into hometown heroes like Spoon, always welcomed by amazingly gracious fans anytime they play in town.

And, of course, Mother Falcon, won best None of the Above, a great compliment for an orchestral band that's never had any intention of fitting into a trend. People just happened to like the lush, baroque pop sound of their Still Life EP.

Even in genres like Folk and Blues, younger artists came away with top nominations. Blues Mafia's had a tough time playing music that isn’t usually marketed to a young audience, but they play it so well that they’ve built a following of honest blues lovers. Last year's Best U18 band the Fireants are still on top, coming away with Best Roots Rock Band before leader Ian Stewart heads off to Berklee.

[Editor's Note: Further U18 wins came from multi-instrumentalist Sarah Jarosz for Best Female Vocalist, Best Country/Bluegrass, and Best Folk Act. The all-girl band Schmillion won the Best U18 Band, a first for that category. In U21 bands, Team Next and the Cipher placed well in hip-hop. Good showings from the Daze throughout the poll and a shout-out to Baphemetis in the Metal category.]