Inside the Octopus’ Garden

A closer look at the Octopus Project's Hexadecagon.

The Octopus Project (by Aubrey Edwards)

Like the Flaming Lips’ Zaireeka compounded by Boris’ Dronevil: Final, the Octopus Project’s Hexadecagon experiment promises to be a multi-sensory overload with eight-channel sound speakers and eight-channel video. The local electronic luminaries give two performances tonight at Whole Foods, 7 and 9:30pm.

Austin Chronicle: Where did the idea come from?

Josh Lambert: The idea for the Hexadecagon show came about while we were on tour last August. We listen to a ton of music in the van, and touring so much we try to listen to as much new stuff as we possibly can. Last tour, we started listening to a bunch of super long pieces by minimalist composers like Terry Riley, Steve Reich, John Adams, etc. Their music puts you in this completely amazing, blissed-out state, and we thought 'Wouldn't it be totally awesome to do something like this at a show with a bunch of speakers and sync'd videos surrounding the audience?'

At the time, we had no idea if it was actually possible, but after a couple of months of testing figured out a way that we could do it exactly the way we had envisioned it. Eight speakers seemed to be the key amount, so we've been writing everything to that. Although, we were initially inspired by the minimalist stuff, the songs we're working on have turned out to be a whole lot more melody & beat driven. We're definitely not just jumping off the edge and abandoning everything we've done in the past, just trying to kick it up a notch. Gotta keep it exciting for folks!

AC: How long has been in the works?

JL: We started messing around with the idea after we got home from tour last year (building electronics, figuring out how to send things out in Ableton Live, etc.), but didn't really dive head-first into writing the songs/making videos until January of this year. We decided that we wanted the whole show to be comprised of completely new music (at least unreleased music) and brand new video all tailored specifically for this A/V setup. It's been a bunch of 16 hour days trying to make everything as intense as it possibly can be.

AC: How do you go about practicing for such an event?

JL: It's been interesting! We pieced together an eight speaker set-up in our tiny practice space and have been practicing and writing with that. We set the speakers up around the perimeter and all sort of stand in the middle when we practice. We've only done one test at Whole Foods, but things sound pretty mind-blowing all spread out. You can actually feel the sounds moving around your head. I'm really hoping that folks let themselves get wrapped up in the whole thing.

AC: This is your second non-album related project of note in the past year. Has this been helping you guys gear up for a new record?

JL: The writing has been coming along really well. Initially, we did the Drafthouse show last year to force us to write some new songs. We had a bunch of ideas & snippets, but no real focus or finished songs. We wanted to do something new and that show helped us write a ton of music in a short period of time, same with this show. In between the two, we've written a bunch of regular band songs as well. I'm not sure how all of it is going to come together, but we plan on recording for the next few months and would like to put something out in the fall. We could have enough material for a couple of albums. I'm not exactly sure how the Hexadecagon stuff versus normal record will play out, but I feel like we're in a really good place right now, and that makes me really happy! 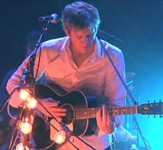