Let Me See That Sissy Bounce 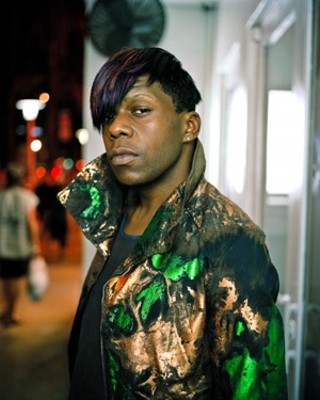 In New Orleans - a city defined by Mardi Gras, where gender-bending is the norm - Big Freedia and friends came up in the bounce scene, performing mainly at straight clubs and parties where the frenetic call-and-response sound has been booming since the early 1990s.

It was tranny rapper Katey Red who broke the barrier, commandeering the mic at a bounce show almost a dozen years ago. Her 1999 album, Melpomene Block Party, paved the way for her then background performer Big Freedia and a wave of so-called sissy bounce rappers. The fact that damn near every bounce track samples the Showboys’ 1986 hip-hop rarity, "Drag Rap"? Poetic justice. Bump & Hustle caught up with Big Freedia as she toured California with Galactic.

Bump & Hustle: Is the West Coast feeling that bounce music?

Big Freedia: Yes, they are. I ripped it up last night at a club called Stud’s. Then I did a little house party and they was loving it. They lost it.

B&H: Galactic doesn’t have much of a hip-hop audience. How are people reacting to what you’re doing?

BF: They are reacting a little bit different but I’ve had crowd participation throughout the whole show. Some people come up after the show and tell me that I blew their mind. It’s been a very good experience for people to see something different and everybody has really enjoyed it. We rocked the house and the song with me and Galactic took it to another level.

B&H: How would you describe bounce music to somebody that’s never heard it before?

BF: Bounce music is heavy bass, call-and-response- type music. It’s party high-energy music. It’s very much a music that you can dance to and enjoy yourself and feel the beat.

B&H: How did you get into the bounce scene?

BF: I got into the scene doing background for my friend Katey Red about 1999 or 2000. I was a background singer, helping her out with some tunes. About a year after that I started rapping and doing my own thing and then it just went on from there. Then it was on.

B&H: So you and Katey came up in the bounce scene. What was the reaction of other bounce artists when you came out doing your thing as openly queer rappers?

BF: When we first started it was a little bit rough. We had some bumpy roads to go on. As the years passed people started getting used to it because we wasn’t going nowhere. We were there to stay and once Katey broke that cycle, breaking the ice as the first drag queen doing bounce music, it changed New Orleans for real. Then here comes another one and another one. We started coming in so many numbers that there was nothing they could do with us. We was criticized. We had people hating on us and talking about us, trying not to get us shows and things like that, but it’s the music that got through. They couldn’t stop the music. We make some really nice music and people love us in New Orleans. And the girls really adore us, that’s what really got us over, all the girls just loving on all of us.

B&H: That’s what I’ve heard, that the ladies really get down to what you and Katey do.

B&H: I think people are surprised to learn that in this scene hip-hop is perceived as a masculine genre, even a homophobic genre. Do you think that perception is true and have you experienced any backlash?

BF: Not from where I stand because the way I carry myself and the way that I perform I’ve never had any problem with backlash or anything. Even with straight guys, once they see my show they’ll come up afterwards and tell me I rocked the house. I really don’t have that problem. All the clubs I do in New Orleans are straight clubs. I don’t do any gay clubs unless I’m just going to relax or whatever. All my clubs that I work at nightly are straight clubs and they love me, females and males.

B&H: I don’t think that could happen in any city. I think there’s something about New Orleans…

BF: There is something special about New Orleans because we worked on it for so many years. I made sure that I was one of those queens that every guy can come up to and be comfortable with and shake my hand or say hi to me without feeling threatened in any kind of way. I’m that person you can come up and speak to and you're not gonna get homophobic because I’m not gonna come at you in that way and they respect me for that. Even when I’m out of town I’ve never really had a problem with rocking a straight club. When I was in New York doing my tour I was doing mostly straight clubs and once I got off stage with my dancers the guys were saying you rocked it. They were into it, so I think it can change and I’m determined to help it change. There are other queens that can follow my lead but I’m definitely on that road, trying to make that change where we can go to any club and feel comfortable enough to not have any backlash or having anybody feel threatened or any gay-bashing.

B&H: Obviously San Francisco has a big gay community. Was it a mostly straight crowd or a large gay crowd out there?

BF: At the Filmore it was a mixed crowd, mostly heterosexuals. At the Stud, it was a gay crowd. Then I did another house party that was a mixed crowd. The crowd varies but in New York I didn’t do any gay clubs but the reaction at all of them was OMG. They’ve been dying to have us back.

B&H: I’m curious if your show is any different if you’re performing for a mixed crowd versus a gay crowd.

BF: Yeah, definitely. I changed it up last night. I do more of the stuff where I talk about what I do with the guys with a gay crowd. At the same time I’m not gonna hide anything from the straight crowd because they’ve heard it all.

B&H: There are a number of sissies doing bounce music right now. How big is that scene in New Orleans?

BF: It’s pretty big but you only have a few big names that have been in the game and who get the respect that they deserve. We have a lot of newcomers and bounce babies coming out, but mainstream there are only five brand names. That’s me myself, Katey Red, Vocka Redu, Sissy Nobby, and Chev Off the Ave.

B&H: What should Austin expect from you and what do you hope to accomplish at South by Southwest?

BF: I hope to pick up a whole lot more fans. They should expect a very interesting show, something different for the eyes to see and something really mind-blowing because when we go to Austin we’re gonna really cut up. I’m excited about South by Southwest and then we have GayBiGayGay, so I’ll have two shows in about three days. I’m very excited.

B&H: Have you done GayBiGayGay before?

BF: Yes, last year. I loved it and they loved me, that’s why I made sure I came back this year. Ooh, it was so much fun.

BF: Yes, but there are cars for miles. That’s how packed it be. All the neighbors come as well. I had to park like four blocks away when we came. The backyard was filled with so many people and it felt so homey. It was really nice.