My Dinner with the Tornados 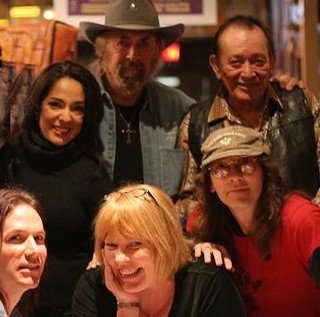 “Looky at that man with the cowboy hat, mama!” The little boy at a nearby table in Threadgill’s hadn’t quite mastered the art of the stage whisper and stared at the rope of hair down Augie Meyers' back, recognizable even through a window at night. The Texas Tornados had arrived, hungry, happy, and with their new CD Esta Bueno in tow.

“It’s been a long day,” Meyers slid out the chair for his wife, Sarah, and then slid into the next one. Indeed, most of them had driven up from San Antonio for a media lunch and meet-and-greet at ME TV Studios, then various meetings, followed by a packed in-store at Waterloo Records to promote the CD and Texas Tornado, the new Doug Sahm biography by Jan Reid. “It’s good, but I’m glad it’s almost over.”

Behind Meyers strides Shawn Sahm with his wife Cheryl, who scoots around beside me with a hug. Flaco Jimenez and his son Leonard, Ernie Durawa and his new bride Laura Emory, Speedy Sparks, plus a few close Tornados buddies are taking over four tables in one of Threadgill’s corners. Long tall Ray Benson, with Michelle Valles, seats himself on the other side of me. Benson produced Esta Bueno for his label Bismeaux Records, and as usual, he’s got several other pots cooking as he looks over the menu.

“I just finished the second Willie and the Wheel record. I’m gonna call it WWII." He cracks himself up and his laughter is so infectious we’re still giggling when the waiter takes orders.

Jimenez’ lined brow is furrowed further as he stares over the lists of entrees until he hears Cheryl order salmon. “I’ll have what she’s having,” he nods and hands over the closed menu. Shawn Sahm leans across the table and talks to Flaco in a low voice. He isn’t wearing a cowboy hat today. Instead it’s a cap, but it still gives him that unmistakable Sahm persona.

Sahm is the linchpin of the group, a collection of talents so disparate it took the original Texas Tornado Doug Sahm to round them all up. When Doug died a little over 10 years ago, it would have been so easy to let the Tornados turn to dust in the wind. But Shawn’s pluck, as well as the undeniable Sahm work ethic, kept them vital and alive, qualities readily evident on Esta Bueno.

The younger Sahm also kept the band’s spirits up when Freddy Fender died a few years ago. They’d already recorded tracks at Stuart Sullivan’s Wire Studios with Fender, but with the elder Sahm gone, Fender was band’s other marquee name. Never mind that Flaco Jimenez and Augie Meyers rank among the best Texas talents alive, with half the band gone what kind of future did the Tornados have?

One that wasn’t going to be put asunder by the mortal coil. They took a break after Fender’s death but picked up the record where they left off and took it beyond expectation. Around the time Doug Sahm died, the Tornados’ records sounded a little formulaic, as if the purpose of recording was to take turns backing each other. Esta Bueno is different, with a collective freshness that is difficult to verbalize, like the warm spring wind after a long, cold winter. It was made with so much heart, el corazon, it’s a family portrait.

About the time dinner plates were being cleaned off the table, Shandon Sahm popped in, all smiles too. “I’m out with the Meat Puppets again,” announced Doug’s youngest son as he gave me a hug. Shawn vaulted over a chair and clapped a hand on his brother’s shoulder as the two grinned.

Wish Doug could have seen it. Maybe he did.

Texas Music Extravaganza, the 2009 documentary filmed at San Antonio’s Leon Springs Dancehall, will be screened at Antone’s on Sunday, March 14 at 8pm. Following the film that features the Tornados will be musical sets by the Trishas, Adam Aguilar Band, and the Raul Malo Band with guest Augie Meyers. 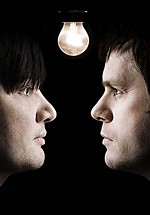 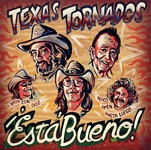