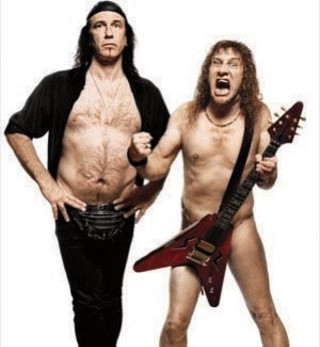 Odds are that on Feb. 2, when this year's Oscar nominations are announced, Anvil! The Story of Anvil will go from heavy metal music legend to full-on cultural touchstone – never mind if the documentary gets nominated and wins. Canadian Steve “Lips” Kudlow, dropping Anvil at Emo's on Monday, would rather talk music than film.

AC: The movie ends, but the audience doesn’t know how the story wraps up. What’s been the postscript to the documentary?

L: We’ve become successful, famous. We’ve been on Conan O’Brien. We’ve been on tour with AC/DC, Saxon. We’re doing a whole American tour. We have agents, managers, a record company.

AC: This is what you always dreamed about!

L: Oh yeah. And then some [chuckles].

AC: How cool is that to be opening for AC/DC?

L: Doesn’t get better, man. For 30 years I lived for the dream, and at that moment I was living the dream – still am.

AC: Were you bothered by comparisons of the film to Spinal Tap?

L: I’m good with it. The whole point is there was nowhere to conceal that. The drummer’s name is Robb Reiner. The movie’s about a metal band. End of story [laughs]. There’s nowhere to go from there, man. So instead of trying to conceal that, we went with it. You know, when you’re in England, go take movies of yourself at Stonehenge. If the producer has a piece of equipment that goes to 11, film it. If you’re going down a long hallway on the way to the stage, you yell, “Hello Cleveland!”

AC: Two issues the film never brings up, and I bring this up because we’re talking about rock & roll here – as in ‘sex, drugs, and rock & roll’ – is sex and drugs.

L: Because there’s nothing going on [laughs].

AC: There was never any rehab or groupies with shark in them?

L: No. That’s very stereotypical, actually. The reality is that it just isn’t there these days. Maybe had we filmed the movie in the 1980s, you would've been able to get that. But we’re married men in our 50s. Maybe another band might want to show that, and maybe somehow culminate it, but we didn’t. It’s not there, so why add it.

AC: Was it there back in the day?

AC: Were you guys wild?

L: I think that would be an understatement.

AC: Again, that’s never touched on in the film: There you are onstage in bondage gear.

L: It wasn’t relevant to the story. It doesn’t really exist today, so what’s the point of bringing up that stuff? If you really want to dig up that dirt go read our book [laughs].

L: Yup. The Story of Anvil. It’s been out for about a year now. It tells all the backstory.

AC: When you finally saw the film, did it give you any insight into the band or yourself – something you might not have considered?

L: Umm, not really. They’re filming me. There’s not much more. There may be certain angles of what I look like, but certainly not my personality. I know who I am. Some things like body language I hadn’t noticed, but beyond that it’s just me.

AC: In the film, getting a record label is a main concern. After the film, you got one. This is Thirteen came out on VH1 Classic Records. Was that what you thought it would be?

L: Well I knew that once the movie came out and there was publicity there’s gonna be labels wanting to be part of it. It’s such a herding business out there. It’s really obvious. It was just a question of what they were willing to do for us – what was on the table. What was the convenience of it for us, or was there any convenience for us. But it had gotten to the point where we couldn’t keep up with mail order stuff. The supply can’t meet the demand because we didn’t have the resources. What happened was we did a licensing deal with VH1 Records and it came out in October.

AC: Were you able to pay back your sister [seen in the movie bankrolling This is Thirteen]?

L: Well, we paid back my sister before we did the deal. Anything we got after that was complete and utterly profit.

AC: On the new album, back-to-back songs “Feed the Greed” and “Big Business” address the music business. How is it now to be in the music business, “agents, managers, a record company”? How’s that treating you?

L: As horrible as it always was [dissolves into laughter]. [Then, resigned] It’s always been the same. It’s a pound of flesh, no doubt about it. It’s all about co-dependency. They need you and you need them. It’s never just one-sided: “Oh, we’re going to help you out.” They help themselves. It’s a business. That’s the way it is. They have no choice and you've got to deal with it. That’s the way it is.

AC: Strange to want something that in the end is going to be dysfunctional.

L: I’m not sure what you mean by that?

AC: Like you said, they need you and you need them, but the “music business” is already something of an oxymoron. It’s fucked up from the get-go.

L: That’s right. What choice do you have? No one does anything for nothing. Every inch you pay for and it comes out of your hide. Realistically it’s all coming from you as the artist, but you’re giving up massive percentages to forge forward. That’s just the nature of it. No one’s going to do anything for you unless they're getting a piece. The potential of you getting very wealthy is certainly there, but not while you have a whole trainload of people to pay. You’re going to maintain and you’re going to keep the train going down the track, but you’re not going to become a millionaire because it costs too much [chuckles]. Just like anything, you sustain it and eventually you’ll get there, but immediate, it isn’t like that. It costs a lot of money to make money. It’s just the nature of business, and particularly the music business, which is even that much more exaggerated.

AC: In the film, is it Robb’s sister who expresses no small amount of pessimism about the band? Your families must be blown away by this turnaround of events.

L: Yeah, they’re really celebrating it. It’s been wonderful. At the same time, it’s a double-edged sword. I’m away from home. My wife is flipped out because she’s got so many responsibilities that I’m not there to help her with. Life is filled with challenges, so you always have to be careful of what you wish for. And I’m not saying that I should be careful of what I wish for.... Nothing comes without a price. Those are the balances in life. I knew that going into this. When I was told I was going to do a movie I knew it would be what it’s ending up to be, and I also knew what came with it. I’m going to be away from home. I’m not going to be home for my son. I’m not going to be home for my wife. I’m not going to be there to cut the grass, to shovel the snow – to generally be there. This is an extraordinarily time consuming endeavor and I realized that. That’s the price you pay. Before this all happened I told my son when he was 7, 8 years old – we watched The Osbournes – I said, “We’re going to become like the Osbourne family. People are going to know us wherever we go. I’m not going to be home all the time. I’m going to be out playing and you’re not going to see me a lot.” And everything I warned him about is now transpiring, but it doesn’t make it easier. All these things lay heavy on your woman at home – you’re not there. These are the costs. It’s not that I’m complaining. I’m just stating reality – state of mind – for what it is. It’s great. It’s absolutely amazing, but like I said, there’s certain aspects that you have to be aware are going to take place. You have to be on top of it and be as understanding as you possibly can to the other people around you. Everything that I do has an effect on everybody else. It’s not completely a selfish endeavor.

AC: You worked for this for so long. You put all of your dreams into this and it happened. What’s the next dream?

L: Hmmm. I really don’t think this dream could come to anywhere near an end because I would still like to pay off the mortgage on my house. You know, pay for my son’s education in another six, seven years when he finishes high school and so forth. There’s a lot yet to go, man. Freedom is still quite a ways away from my perspective and I’m working on it. There’s goals and aspirations that I still have to reach at this point. Obviously, yes, I’m very famous and things have turned around for the band and we’re very busy, but at the same time, like I said, there’s a huge choo-choo train that people are hungry and want a piece of and it’s going to take a while to go down that track until everybody gets fed and I see the end of the tunnel. I’m aiming at things financially that I’m hoping to get to. And that’s not a complaint. I’m totally willing and able and excited and full of hope, so it’s all good. As long as it continues to create more music and more tours and continue on it’s never over. Just like it wasn’t over for the Rolling Stones after so many years. You have to write another album and go out on tour. It never stops. That’s the beautiful thing about it. It’s not just something that’s a means to an end, like you become a dentist and go every day and fix people’s teeth [chuckles].

AC: Has Anvil ever played Austin?

L: Yeah, I am too. Playing in Texas, and playing in the United States generally has been an extraordinary rarity. The last time we came down was in 1998 and we played in real dives with no promotion. This is a real big, big difference.

AC: Well, you’re still going to be playing a dive, but it’s one of the best in town.

AC: No, this is not a House of Blues, but it’s a perfect room for Anvil.

L: Well, I can’t complain about that. 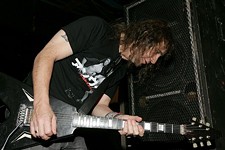 I Like It Hard 'N' Heavy
For the purposes of this Anvil blog, that's what she said