Next Up bloggers weigh in with their favorites from 2009

2009 was a great year for Austin music, introducing new musicians, songs, and venues. There are a few things I would love to see happen in 2010. One, Austin’s scene has proven to be wildly diverse, but a “new” sound hasn’t emerged for a while.

I think we need to come up with a style people haven’t heard before, not that I don’t love our rock and blues! Another thing would be more colorful, different live performances, such as ones given by the Octopus Project. Visuals can be just as important as audio in a live performance. It was an amazing year!

3) Daniel Johnston, Is and Always Was (Eternal Yip Eye Music)

Best CD Reissue: The Beatles' remastered albums win my person favorite, not only because of the profound difference in sound quality but because of the new, interesting packaging and rare images.

Band I Saw the Most: Carson Brock and/or Edison Chair are the bands I’ve seen and gigged with most, which is quite fortunate in my case because both are musically diverse and entertaining.

Best New U18 Austin Band: South of Center, a relatively new band of middle schoolers, has continued to amaze crowds with their mature sound and style. 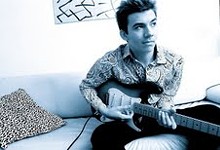