Good Night Austin, Texas, Wherever You Are

Dweezil Zappa returns some ‘Bongo Fury’ to Austin, this time at Stubb's. 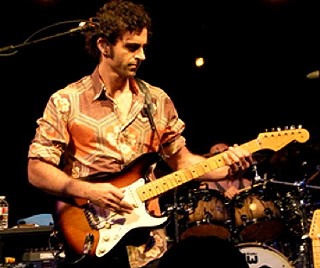 First a little personal history to put Thursday night’s Zappa Plays Zappa performance at Stubb’s into perspective. The first rock show I attended was Frank Zappa & the Mothers of Invention at the Fillmore East in New York City, June 1971.

A Sunday night late show, it was around 3am when Beatlemania broke out as the Mothers were joined by John Lennon and Yoko Ono for their encore. Later, Lennon released the resulting jam on Some Time in New York City. Afterward, I saw Zappa many times, including several of his famous Halloween shows and a particularly special mid-1970s winter night at a hockey arena in Buffalo with a blizzard raging outside. Frank Zappa stopped touring in 1988 (I’m pretty sure the last time I saw him was 1987), and passed away in 1993, but since 2006 his son Dweezil has revived the music, touring with some of his father’s former sidemen such as guitarist Steve Vai and vocalist Ray White.

Thursday’s appearance at Stubb’s was the first show of ZPZ's winter tour and although the band has been revamped minus names from the past and re-titled to Dweezil Zappa Plays Zappa, they brought the elder Zappa’s demand for excellence in musicianship and delight in tweaking the sensibilities of the audience with them. Things got hot instantly with a raw version of jazz-fusion instrumental “Apostrophe.”

For next two and a half hours the seven-piece ensemble skipped through the Zappa songbook, some familiar (“Broken Hearts are for Assholes,” “Carolina Hard-Core Ecstasy”) and some obscure (“T'Mershi Duween”). Dweezil proved an easygoing frontman, acknowledging his father's history with and affinity for Austin – part of the latter's Bongo Fury was recorded at the Armadillo World Headquarters – explaining where he found arrangements or explaining song titles like “RDNZL,” pronounced Redunzel a contraction of redundant and Repunzel, but also wielding his guitar in a way that paid tribute to Frank while retaining his own voice.

Among the band, Sheila Gonzalez garnered a great deal of attention whether blowing the sax with a fury beyond her small stature or glowing her way through a soul ballad rendition of “You Didn’t Try To Call Me.” New vocalist Ben Thomas impressed with his ability to emulate the variety of singing voices Zappa used throughout his career even bringing a Dada element to the night with a megaphone ‘solo.’

One of Austin’s fave guitarists Eric Johnson joined in to duel with Dweezil on “Carolina” and the first encore closer “Muffin Man.” “Don’t Eat The Yellow Snow,” “Montana,” and “Willie the Pimp” at the end of the night left the crowd with a funny taste in its mouths, one they’ll likely return to the next time Dweezil Zappa pays Austin a visit.

Pound for a Brown
Willie the Pimp