Bill Narum: We Call That Art

ZZ Top iconographer Bill Narum moves on to the next canvas. 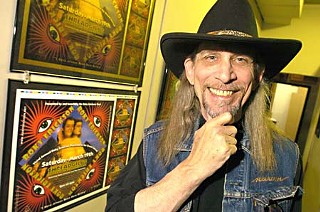 The news wafted through Austin, a town already unnerved by the recent death of Robin Shivers. This name was just as sad, the shock just as big: Bill Narum was dead.

No one journeyed through Texas music without seeing Bill Narum. His splashy, bold art decorated every ZZ Top album from the vinyl and 8-track days until CDs rendered LP art a mere detail. His sweeping style defined the rattlesnake bite of their music, providing the visual image of that Little Ol’ Band from Texas as sure as Billy Gibbons’ guitar crunch. It was a style he applied to musicians from Van Wilks to Stevie Ray Vaughan, from Armadillo and other local club posters to video and computer games, an approach neatly illustrated in his 2005 art show at the South Austin Museum of Popular Culture, titled “You Call That Art.” If it involved art, Narum dabbled in it.

Narum was also deeply rooted in the Texas counterculture. Born in Austin to two UT art students (his sister is artist Heidi Narum Hyatt), he grew up in Houston, where he worked with The Space City News and co-founded rock station KLOL. That’s where he first crossed paths with Billy Gibbons, cementing one of the most enduring bonds of partnership between art and rock. Yet Narum’s interests were as broad and varied as the Lone Star state he so passionately loved. Texas history and organic gardening, philosophy and the economy, politics and poking through Goodwill shelves, Narum found art in everything that interested him.

Narum was also board president of the South Austin Museum of Popular Culture, where I had the pleasure of hanging out with him once a month for the past three years in the name of the museum's board meetings. He drafted me for the board, in fact, and asked me to serve as president. I took him up on the board offer, but declined the presidency. I didn’t have time to be president, but the chance to work alongside Bill Narum and all that poster art I’ve loved for decades I couldn’t turn down. His presence, like that of all the artists who call the museum home, was iconic. Look, I once nudged my brother Scott at a party, that’s Bill Narum who drew the ZZ Top album covers. Scott’s head snapped around and he grinned broadly. I could almost see the images that flew through his head accompanied by “Tush” or “La Grange.” That’s powerful stuff.

Death seems to be the theme this year, yet with the passing of Rusty Wier, Robin Shivers, and Bill Narum too close together, there's a renewed appreciation for those who’ve devoted their lives to the art of making Austin’s art so memorable. While speaking with Narum’s beloved Gloria Badillo Hill, the woman he’d chosen to spend the rest of his life with, I learned that Bill died in apparent peace, likely of a heart attack. He was found in his art studio, sitting in the chair in front of his art table. His legs were stretched out and his head lay to the side, on his shoulder.

Ah, I thought. He’s just resting up for that next canvas.