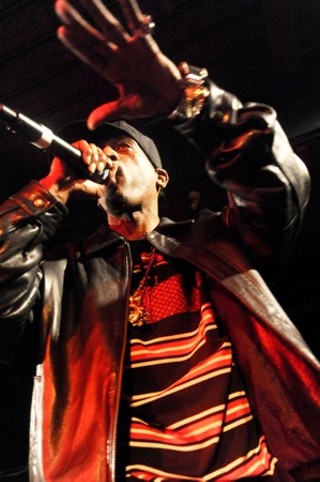 A stage filled by an MC and his DJ is a rare sight in hip-hop these days, but Rakim’s schooling at Emo’s Wednesday night was never about the here and now. With The Seventh Seal not out for another two weeks and no new material since 1999’s The Master, there wasn’t much use in hitting anything but the classics.

He strutted onstage, flashing “Holy Are You” to a crowd already hyped off DJ Technician’s Nineties East Coast lead-in, then “Eric B. Is President,” “My Melody,” and “I Know You Got Soul.”

“It’s been a long time. I shouldn’t have left you without a strong rhyme to step to.”

Rakim’s drifted through hip-hop over the last ten years, but his catalog remains one of the most respected. The crowd, decidedly older than your standard these days, rapped along, splitting bars on “Paid in Full” and taking the reins on “I Ain’t No Joke.”

Rakim stayed stoic, or maybe just really stoned, throughout. That curl in his delivery is still there, and he’s got a voice that can’t help but talk smack. He approached the DJ Premier hustle of “It’s Been a Long Time” no differently than he does the boom bap on “My Melody”: mic square in front of his face, left hand flowing down by his waist.

With GZA and the Pharcyde headlining Fun Fun Fun Fest this weekend, and Jay-Z ballin’ at the Erwin Center Tuesday night, it’s a rare chance to see such a quasi-Mt. Rushmore of vintage hip-hop these days, but no one hit the foundation so hard as Rakim did. Even today, it’s still “Follow the Leader.”