Sunny Side of the Street 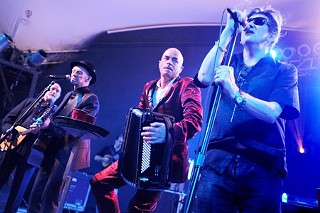 XYZ: MacGowan and company at Stubb's (by John Anderson)

Wednesday night's Stubb's audience was of the second school. Yet for everyone who missed the greatest Irish band from London when they toured raucously during the Eighties, the Pogues still had plenty to offer, even if it was mostly from their early glory days. Shane MacGowan owes someone upstairs a lifetime supply of whiskey for saving his liver from cirrhosis at age 30, though that didn’t prevent him from having a table with four plastic red cups of liquid parked next to the microphone.

Clad in all black, save for a pair of fire engine red cowboy boots, MacGowan looked somewhat bloated and pasty, but he still warbles with charmingly unintelligible fervor. The opening 1-2 of “Streams of Whiskey” followed “If I Should Fall From Grace With God” and songs drawn largely from early recordings and favorites that struck a chord with the all-ages audience. MacGowan left the stage every two or three songs, leaving tunes such as “Thousands Are Sailing” and “Tuesday Morning” to the estimable band to sing.

This wasn’t a bad thing, as all vocalists engaged the fans despite audience tussles and botched attempts at crowd-surfing. After all, they came to hear “Bottle of Smoke” (during which MacGowan unfurled a small Irish flag), “Dirty Old Town,” and “Irish Rover.” Even though they didn't play “Waxie’s Dargle,” “South Australia,” or “Fairytale of New York,” we got “The Boys From County Hell,” “The Sunny Side of the Street,” and “A Pair of Brown Eyes,” delivered by Shane with a hint of the old Pogues magic, plus “The Star of the County Down” during the encore.

Once upon a time, the Pogues were just about the only band of their type, young punks with a deep and abiding love for traditional Irish music and a willingness to skin it for all it’s worth. Nowadays, their acolytes include Flogging Molly and the Dropkick Murphys, which leads to the Quibble: About a third of the crowd seemed interested in Justin Townes Earle, whose pop acoustic sound opened the show. With all due respect to the young songwriter with good genes, this show begged for Houston's Blaggards or Austin's Tea Merchants or Dallas' the Killdares to open. Texas’ own contributions to the rollicking Irish-rock genre are more than up for the task.

A wise man said that once you put on the clown nose, it’s almost impossible to get it off. For MacGowan, who cut his reputation on whiskey brilliance, the glow of red was good enough.

The Pogues
Just Look Them Straight in the Eye and Say ... Poguemahone!! (Record Review)