Next Up susses out the last day of ACL Fest 2009

Shoes were left abandoned in the mud during ACL Fest 2009. (by Margaret Moser)

Three days, two ruined pairs of shoes, two boxes of film, hours of back pain, and a load of muddy laundry later: worth it. Sunday, mud covered every square inch of Zilker Park. The entire festival smelled like a rodeo even as festival staff spread hay to make it manageable, but no such luck. This was the last day for my shoes. I headed to Black Joe Lewis.

It is perhaps sacrilegious, but as an Austinite blues is not my forte. That said, I thoroughly enjoyed Black Joe & the Honey Bears. In the spirit of James Brown, they played an energetic and very accessible brand of blues and R&B, delivering it with rare authenticity. I am a sucker for horns and harmonica, and both run aplenty in the band's gritty tunes. It was a nice way to start my day, and after I got used to the rodeo stench, I forgot that the park smelled at all.

Black Joe was followed by the much anticipated B-52’s. From the first note of the first song, it was apparent that age had not slowed the group a step. The band gave everyone what they wanted to see, playing their most popular songs and donning their colorful retro garb. “Hello Austin, here’s a lesson in ancient history," front man Fred Schneider lectured the audience before erupting into "Mesopotamia." Yes, the song is about history, but one could not help but think that Schneider’s comment had a double meaning. The set was enjoyed by young and old alike, dancing to every song, yet you could see the thought bubbles hanging among the rising clouds of smoke over the audience: "Rock Lobster…Rock Lobster…" And then it happened. The song was greeted with a roar from the crowd and a mass chanting of the lyrics. With their performance, the B-52’s solidified my vote for band of the day.

Not that the rest of the day was a letdown, quite the contrary. The Arctic Monkeys took the stage next, and while the group’s new long hairstyles may not be their best yet, the new album is. The band played an energetic set, complete with everyone’s favorite songs with Alex Turner’s wry running social commentary.

Passion Pit (the band that started as a Valentine’s Day present), may very well be the best Valentines day present ever. This band is just fun, and Michael Angelekos’s playful falsetto prompted the crowdsurfing of a fan dressed in a green spandex suit, like Charlie from ‘It’s Always Sunny In Philadelphia.’ Seeing a green man crowdsurfing made the show all the more entertaining. Best ACL Costume: Green Man.

Everyone wants to know what Jack White is going to do next, which is why I weaved my way through groups of mud-caked dancers (kind of creepy) and to Livestrong stage to see the latest of White’s wildly successful side projects. The Dead Weather delivered an hour of unrelenting southern psychedelia with White keeping the beat on drums. It did look like four very, very, very confident rock stars but this is neither surprising nor offensive when you consider who is in the super group. The Dead Weather closed their set with Jack White giving the audience what they’d all been hoping for and coming out from behind the drum set to shred on the guitar. Of course the guitar playing was fantastic, but did anyone see Jack White’s white pointed toe leather boots? This man has the best taste in footwear. Best ACL Footwear: Jack White.

Girl Talk was essentially a party. As Greg Gillis writes no songs and plays no instruments, it’s interesting that he’s achieved this level of success. I think it’s probably because he does it the best. By picking samples everyone knows, he makes the show very participatory, almost a sing-a-long. I had trouble shaking the feeling that I was at a frat party, though I saw what was enjoyable about Girl Talk. Moos importantly, someone in the crowd flew the Texas "Come and Take It" flag, so the award was obvious. Best ACL Flag: "Come and Take It."

I bailed after Girl Talk. I’ll leave Pearl Jam to the other 40,000 to tell people about. While the stink will fade, the mud will dry, and the newly sodded grass probably got trampled to death, the memories of ACL 2009 live vividly. 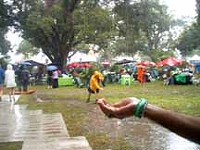 If It's Not a Dust Storm, It's a Swamp
Next Up's Aaron Miller reports from ACL Fest Day 2