Report from the Festival's first day 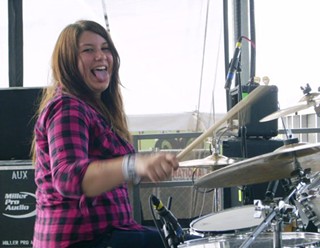 If it's fall, it must be Austin City Limits Festival, and the festival gods blessed it with great weather ... for the opening day, at least. The much ballyhooed grass is indeed cushy and plentiful, and though the day grew warm, it was as pleasant an opening day as I can remember.

Girlie Action started the day hanging out at the Austin Kiddie Limits tent, where Stoosh kicked the fest off with a tight, classic rockin' set. No surprise there, as Ross Blake, Sammy Ivester, Daniel Klasson, and Harrison Richards are formerly the award-winning Loose Cannons, now graduated from Natural Ear Music Camp, kicking ass and taking names on their own.

The Paul Green School of Rock followed, proving that teen talent isn't just a Texas phenomenon (we knew that anyway). This year brought in PGSOR's East Coast All Stars to play with the Lone Star team, better known as the Midwest All Stars. Also fans of classic rock, their set traded out players during their powerhouse set that included a smokin' version of Van Halen's "Hot for Teacher." East Coast keyboardist Damon Smith pronounced the experience "awesome," while guitar whiz Dan Geraghty was wide-eyed at the acts. "It's crazy with all the big stages!" Crazy good, of course.

Did some loafing at the Wildflower Center Stage, better known as the Gospel Tent, where I cooled my heels with ex-Chronnie and current Houston Pressman Chris Gray to the funky-sweet sound of the Gospel Silvertones. Their very contemporary take on spirituals melded inspirational harmony with a dollop of rap, perfect for the early afternoon.

I fell in love with a band just hearing their music drift over the Grove where I was busy yakking with Sin City Social Club director Shilah Morrow, KLBJ's B-Doe, and Bug Music's Eddie Gomez. The lucky fellows are Blitzen Trapper, the six-piece band from Portland, Oregon on SubPop who deftly thread the lessons of classic rock with an indie sensibility. "Oh yeah, they were my #1 record last year!" bragged the Chron's Doug Freeman when I extolled their virtues. Okay, so I'm late to their ball, I'd stay around past midnight to hear more from them.

Last I saw of Chronicle Next Up blogger and AfterMath bassist Olivia Bennett, she was off to play with none other than Daniel Johnston. "I'm not really sure how this all happened," she confessed, as she was herded out the gate to the stage. No problem, Olivia. We'll get the scoop from ya later.

The word is that it will rain tomorrow, but nothing will keep me from seeing The Decemberists. And what song should be repeating in my head but Joni Mitchell's "Woodstock." The Paul Green kids performed a rocked-out version of it. When they sang, "we are stardust, we are golden," it was a deeply sweet reminder that the beauty of music festivals comes from the communal experience as much as the personal one.