First teen-powered benefit is a hit 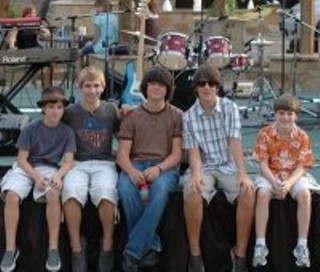 Watch out for Loose Wheels!

Despite the weather, hundreds flocked to the Austin Music Hall on Saturday, September 12 for the very first show supporting Teens4Autism and Thoughtful House, organizations helping better the situation for kids with autism. A lineup of nine acts played, with musical genres varying from soul and folk to indie pop and hard rock.

The event started with a bang as Sam Debold, a 12-year old with autism, wowed the crowd with his masterful piano playing. As if his keyboard skills weren’t impressive enough, Sam even played and sang “Hotel California” with a voice so pure it brought tears to some of the audience members’ eyes. Aftermath (my band) also played, along with Edison Chair, Georgia & the Boys, Loose Wheels, Lake Travis Fiddlers, Gabriella & Jordan, Live Transmission, and the Carson Brock Group. If you didn’t make it this time, no worries! Plans for next year’s benefit are already in the making, and look to be bigger and better than before!

Loose Wheels, just some local garage band? Far from it! This classic rock band plays songs by the greats such as The Eagles and Jerry Lee Lewis, keeping the essential taste and energy to the music while adding their own modern take to your favorites. G.R., guitarist, explains that, “…when you have a group of talented friends, it’s only natural to make a band.”

As for their inspirations, they love The Allman Brothers, Stevie Ray Vaughan, and the Doobie Brothers. Landon the guitarist believes, “we’re inspired by just about anything, really. We just get so fired up doing what we do that it doesn’t take a lot to get us going. A receptive audience both during and after a show is a real inspiration, though.” You can see Loose Wheels at Hill’s Cafe on Halloween night and also look out for their new music video coming out soon.

Can you dance, sing, play an instrument, or act? The Austin School for the Performing and Visual Arts is offering kids the opportunity to get involved in a competition called YouthCast in which varying talents compete to perform at the Long Center in front of a panel of industry professionals. The overall winner receives a special prize package to help celebrate and promote their career. Interested students of all ages can apply online or attend a live casting call at the Hill Country Galleria Amphitheater on Sunday, October 18. Please note: online registration ends October 1.

Olivia Bennett’s Top 5 British Invasion Songs 1. "For Your Love" by The Yardbirds 2. "I Can’t Explain" by The Who 3. "You Really Got Me" by The Kinks 4. "The Look of Love" by The Zombies 5. "The Night Before" by The Beatles