They Are Motorhead, They Came and Kicked Your Ass 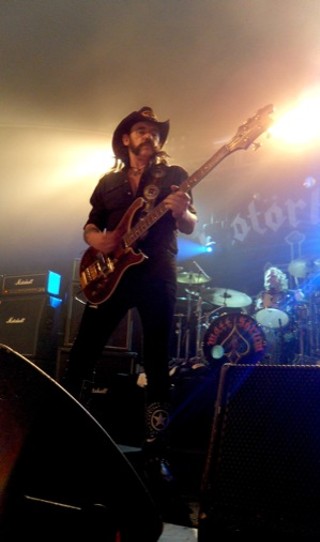 Rock and roll subgenres breed like rats and tend be just as impervious to the fickle whims of pop culture, and none are more durable than the British steel of unalloyed metal, heavy or otherwise. Case in point: Motorhead, the band, the brand, the lifestyle. They snatch passing trends and eat them for breakfast, probably with a whiskey chaser.

When, exactly, was concert-going's golden rule (Thou shalt not wear the band's T-shirt to the band's gig) struck from the Maximum Rock 'n' Roll bible? I can still recall the stares and snickers from other fans when I dared to make a thoroughly scrungey Nirvana tee the top-third of my ensemble (also included: shredded-wheat Wranglers, Rit-dyed black, and scrappy, fourteen-hole oxblood Doc Martens). Liberty Lunch, October 21, 1991: I learned my lesson. Don't be that guy, dude. Should've worn my Tad rags, probably.

Sunday's capacity crowd at Stubb's, though, was a virtual sea of Motorhead gear. I counted at least 16 different band-branded tees and even a few ratty back patches stitched onto spiked and riveted denim jackets, itself a tradition nearly as ancient as original inglorious bastard Lemmy Kilmister, who, at 64, now qualifies for both pending immortality and the AARP, not to mention the Rock and Roll Hall of Fame.

If the Stubb's gig is anything to go by, Kilmister's more likely to expire than retire, probably accompanied by an ear-raping thunderclap and black lightning crackling down from on high while the band tears through their final, skull-rattling rendition of "Ace of Spades" on stage at Roskilde.

Taking the stage after openers Nashville Pussy (performing in fine skank-metal fettle, as ever) and Reverend Horton Heat (no longer a psychobilly whippersnapper himself, he presumably shares the blood of the eternals with Kilmister), Motorhead announced its return with Kilmister's short sharp shock of an introduction: "Good evening. We are Motorhead. And we play rock and roll!" Then the trio launched into a blistering version of 1982's "Iron Fist." Nice one, that, as the crowd instantly solidified into a single mass of churning, headbanging acolytes, utterly in the grip of Kilmister's basso profundo fret-frying fist and former Guns and Roses member Matt Sorum's epic skinswork.

Motorhead's "Everything louder than everything else" motto was evident during early set number "Stay Clean" and "Bomber," but the occasionally over-thick sound benefited from the open-air venue. And, c'mon, this was Motorhead, the first metal band embraced by the punks and skins and the first to return the love to their newfound hardcore fanbase. Rush fans have always tended to explode in a puff of pink smoke whenever they stray near Motorhead, but the sternum-cracking metal-punk concussion of Kilmister and company remains the ne plus ultrasonic of genre-and scene-scrambling kickassery.

You generally know what you're in for when you take on Motorhead – both Yanni and Warrant fans were thankfully conspicuous in their absence – and for most of their hour-plus set the band gave the crowd what it wanted most: the hard, fast rules. One surprising exception was the roots-blues swagger of "Whorehouse Blues," off 2004's Inferno, complete with Lemmyfied spittle clogging up a bruised-looking mouth harp and Kilmister's patented lascivious gleam ratcheted up to Robert Johnson's devil-damned proportions. Newer bomblasts like the chorus-heavy "Rock Out" merged with "Killed by Death" and other walloping Motorhead standards, resolving into a perfect storm of hi-octane metalpunk. "Stone deaf forever," indeed.