I last interviewed Radney Foster in May of 1999. It hardly seems that long ago.

Back then we talked about See What You Want To See, which was built around his experience with a series of highs and lows. Now, the Del Rio native has issued Revival (Devil’s River), a gospel album of sorts that’s his strongest since See What. While he was recording, the singer-songwriter again went through some life-altering events: the death of his father and the end of a more than decade-long, 5,000-mile separation from his son. Last week we talked about turning 50, the making of the new record, and the fruits of reuniting with his old Foster and Lloyd partner, Bill.

Geezerville: I can’t believe it’s been ten years since we sat in that hotel room in Austin. Does it feel like ten years to you?

Radney Foster: No, it doesn’t. But I’m aware it's ten years because I have an 18-year-old who’s a freshman in college. The cool thing, and it’s part of what’s wrapped up in this record, is that he’s home and going to college two miles from my house. He’s swinging a guitar and writing really good songs and I can’t seem to stop him.

RF: Pretty normal actually. It was fun that I got to turn 50 with birthday parties in Austin and Nashville and had all my friends come out and do duets on my songs. It was fun, flattering, and humbling in a way. There were so many people that came out to share my songs with me, from all generations, they were both neat experiences.

G: I tried to get into the party here in Austin and couldn’t find any parking.

RF: I know. There were a thousand people outside in 105-degree heat. They set up speakers outside and started handing out water. I was blown away.

G: Was the new record something that was planned or was it an organic kind of thing?

RF: It wasn’t planned. It was just life happening, because last October I had the opportunity to go into the studio with my band. The first two songs that we cut were “Revivial” and “Second Chances,” which I think are two of the standout songs on the record. Afterwards, it was so strong, I thought to myself, "This is gonna be a band record." I had been writing for about a year and you can’t help but be affected by what’s going on in your own life. All of these highs and lows were happening at the same time. But after those recordings I really knew where the record was going. It just made me think that it all had to fit, thinking "What am I trying to say here?"

G: That’s a little bit different for you, isn’t it?

RF: For the most part any album has just been a collection of things. See What You Want To See was a watershed in that it was the same kind thing. I was going through an incredibly emotional time in my life. I was a newlywed but I had gone through a messy divorce and my son had been moved halfway around the world. That’s a lot of highs and lows. I just wrote about it. [Producer] Darrell [Brown] was the one who went through my songs and picked the ones that cut close to the bone. I think that whenever I’ve made albums on my own, I’ve not been stretched enough. Not that I didn’t make good records, but it’s good to have somebody around who will really stretch you, who picks out things that are way down in your soul that need to be said.

G: You wrote a song on this record with Darden Smith, who I think is underappreciated.

G: How did you meet up with him?

RF: We’ve been friends for years. Foster and Lloyd went and saw him in Deep Ellum, before he had a record deal. In the last three or four years, he’s been coming to the house periodically to write and it’s been a really good relationship. “Angel Flight” is an important song because he was already talking to the Guard about using music in a therapeutic manner. Then they started talking about the Angel Flights and he said, "That’s a song." They, in a way, commissioned it, asking if he’d write that song for them. He came to me with his ideas and heard the stories and I felt honored to involved with it. He actually did some research by talking to the guys who did those missions and a lot of the stuff is pulled straight from those interviews. We knew right after writing that we had something special and we’re working with the Texas National Guard Family Support Foundation, helping them raise some money and awareness. The lion’s share of the royalties from that song go to that charity.

G: One of the things that stands out on this record is the guitar sounds. Is that you?

RF: It’s me and Eric Borash. I actually tracked more electric guitar on this record than I ever have before. I’ve always played electric guitar live and I’ve always played it on record. I was terrified to play it on record because I was in a band with Bill Lloyd, for Godssakes. Eric really encouraged me. He’s from Minnesota. He’s an amp guru. He’s played for Fogerty for a tour. He’s been involved in a lot of the productions that I’ve done, like the Randy Rogers Band.

G: You mentioned production. Is that something that you wanted to do or did people just approach you about it first?

RF: People just started coming to me and then I found out that I liked it. It’s just another way to be creative and it’s fun. It’s certainly different than being the artist where their name goes really big on the front and your name goes really small on the back, and you have to remember that. One of the things I bring to the table is my songwriting ability, song-doctoring ability. I’ve been taking T-Bone Burnett lessons for years.

G: I know that you’ve been doing selected dates with Bill. Any chance there’s going to be more of that?

RF: There might be. We’ve been writing consistently for the first time in 20 years. We’ve written about five or six new songs. We’re both on the road for a while now, but I’m sure we’ll write some more this fall and see what happens.

Radney Foster
Everything I Should Have Said (Record Review) 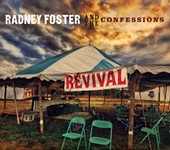