At the Corner of Starlight and Springtime 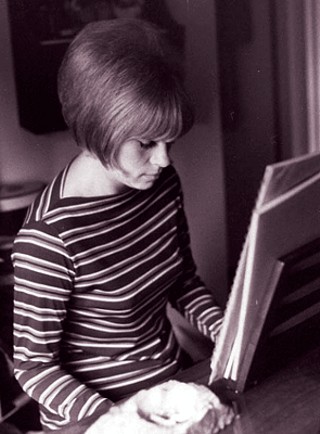 Ellie Greenwich died last week. Hers was a passing that received enough notice to do her credit, yet it seemed flat to read the tributes in black and white. They should have been accompanied by pealing bells, chirping birdies, and taffeta skirts whispering amid sighing girl choruses.

Ellie and her peers Carole King, Cynthia Weil, and Jackie de Shannon wrote the songs of a lifetime. Individually and in their partnerships with the likes of Jeff Barry and Barry Mann, they gave us musical mirrors to reflect and dream over, three-minute dreams spun on a 45. If the subjects were light and girlish, they also reflected a time when the music was listened to only by the young, when adults didn’t lay claim to decades of rock history. The music of the 1960s remains so perfect because it was the young making music for the young, rock & roll reveling in its own adolescence, a youth it would only experience once.

Truthfully, her girl-group sound with the Ronettes felt a tad passé when I came of rock & roll age in 1964 to the British beat. I liked the music I’d heard before seeing the Beatles on Ed Sullivan, and – living in New Orleans then – been aware on some level that the Dixie Cups were local and national, though I had no idea how that worked.

We bought our 45s and the occasional LP at places like K&B drug store, at Napoleon and St. Charles, and places downtown. “Chapel of Love” was the soundtrack for that spring and I can see the girls of my 6th grade class, dressed in white tailored blouses and light blue wrap skirts, miming the Dixie Cups, the pride of New Orleans, finger-popping as they sang, “I’ll be his, he’ll be mine, and we’ll never be lonely any more.”

The song Ellie Greenwich co-authored tugged at my pre-teen heart. I was ten; marriage wasn’t really in the picture. Just getting a boy to look at you without hitting you was a challenge, which is why the plaintive plea of “I Want To Hold Your Hand” appealed to me. Still, the way the Dixie Cups sang so sweetly didn’t seem far from the schoolyard chants of “First comes love, then comes marriage.” Listening in the car to a vintage All Things Considered interview on NPR last week, host Terry Gross asked Ellie if she really believed in that kind of love.

“I grew up in Levittown, Long Island, on the corner of Springtime and Starlight,” she said, giving a throaty laugh that resonated through the car and blotted out the highway traffic. “What do you think?”

Could I even choose a favorite Ellie song? Her mark on modern pop and rock is indelible. The satiny sway of “Be My Baby.” The lowdown groove of “Hanky Panky.” The tear-jerking “Leader of the Pack.” That silky springtime promise of “Chapel of Love.” The exuberant “Do Wah Diddy.” The heartfelt anguish of “River Deep, Mountain High.” She is among the few names I truly hoped to interview. Now that she’s gone, I am bereft, feeling acute personal loss without knowing someone, but knowing their art well enough to consider it part of my life.

Ellie Greenwich was 68 years old when she died last week, but she lives forever in the soundtrack of my heart.