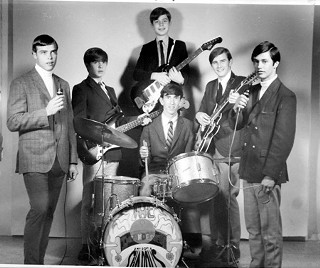 The Incandescent Shadows played a party at my house during my freshman year at Lee High in San Antonio, Christmas 1968. Left to right: Ronnie Ward, Bill Redmond, Rob Brumfield, Joe Coplin, Dave Floyd, and Homer Rodriguez. Total recall after 40 years of not seeing their faces.

The real allure of rock & roll is that it’s the fabled fountain of youth. It keeps you young, makes it all okay again. The world can be bitter and glum and here comes that one song, shooting like a sunbeam through the dark clouds, zapping you into the past. Ah, you’re 15 again and the world’s all right.

That’s me, anyway, at least right now, in a stage where I’m playing 45s on a turntable for fun. For the last few months, I’ve been part of the Teen Canteen reunion committee, organizing a reunion show in San Antonio for bands that played the Teen Canteen in the 1960s and 70s. Come Sunday, Aug. 23 at Floore’s Country Store, we’re trying for that magic one more time.

San Antonio isn’t Austin, and I don’t just mean that glibly. Their music scene operates on such a totally different level than Austin, it’s not even comparable. Way back in the 1960s, though, San Antonio was positioned as prominently as Austin. San Antonio’s Sunken Gardens Theatre was the scene every Sunday afternoon for rock and psychedelic bands of the day, a hippie lovefest that featured bands like Shiva’s Headband, Virgil Foxx, and Homer. San Antonio also had the Teen Canteen.

Forget the cute, silly name – the Teen Canteen was the staging ground for San Antonio’s vibrant rock & roll scene, from before the Beatles until the dawn of punk. Owner Sam Kinsey opened the first Teen Canteen in 1960. It moved around to several locations, including a ballroom dance studio, settling at Wonderland (now Crossroads) Mall in 1963. In 1968, the Canteen moved to its last location on Bitters Road across from Northeast Stadium, the place it would occupy until it closed in 1977.

Until an enterprising former Canteen musician named Mike Lowell started his San Antonio music site, the Northside nightclub lay forgotten in the city’s musical history. In its day, the Canteen and its roster of local and touring bands made it a gem in the crown of Texas music.

Local bands like the Pipelines, the Outcasts, the Spidels, the Stoics, the Swiss Movement, and the Virgil Foxx Group, plus touring bands of the day such as the Strawberry Alarm Clock (“Incense and Peppermints”) and the Syndicate of Sound (“Little Girl”) played there. More importantly, it was one of the places for Texas psychedelic bands such as Sweet Smoke, Zakary Thaks, Bubble Puppy, Shiva’s Headband, the Moving Sidewalks, and Lord August & the Visions of Lite. ZZ Top played their first gig at the Teen Canteen; others who got their start there include Mike Nesmith of the Monkees and Chris “Christopher Cross” Geppart.

Lowell’s site stoked these memories until they caught fire. Urged by one-time Canteener Neka Scarbrough-Jenkins, Lowell floated the idea of a reunion and was met with enthusiastic response. Even better was finding that Sam Kinsey was still around and game for the show.

Dozens of musicians from the era are reforming and reconfiguring for the reunion this Sunday, including Homer, the Chayns, the Laughing Kind, Rocksand, Cain’s Children (with Zakary Thaks’ Chris Gerniotis), Mister Moose, the Zilches, Stillwater, Island, and United. The Robin Overall Band, Steve & Keith Owens, Mike & the Jammers, and Los Dos Esteban also perform.

It’s not just nostalgia for me … okay, there’s a LOT of nostalgia, but that period of my life is what inspired me to start Next Up and find out what was going on with Austin’s teen bands. And the best part? Sam Kinsey will be there. We get to say thanks for the memories and he doesn't have to check our IDs.