Always Coming Back Home to You

Welcome to the big time, Slug. We’re glad you noticed.

"Most of the shows we play, the back of the venue usually starts at that tree and runs straight across to that light over there,” Slug said late into Atmosphere's throwdown at Stubb’s Wednesday night. “You have no idea how good it is to see all you ugly people all the way the fuck back there.”

Atmosphere wears its underground status like a badge of honor, but that claim that may not ring true in Austin any longer. The Minneapolis duo's usually found down the street at Emo’s when they roll through, but it became painfully obvious during last year’s two-night sold-out affair that the love connection between Atmosphere and Austin deserved a larger setting. Enter Stubb’s, a venue that at first glance looks like no place for a Rhymesayers reunion.

Slug (Sean Daley) and DJ Anthony “Ant” Davis stayed on point. Beefed up by the presence of guitarist Nate Collins, singer Mankwe Ndosi, and Erick Anderson on the keys, Slug showed the love straight from the onset, wearing a red Texas Rangers hat he later gave to a fan. The throngs of Ugly people, a term of endearment to anyone who knows Slug and Ant, soaked up two tracks from 2002’s God Loves Ugly – the title track and “One of a Kind” – before Slug’s first vocal profession of Austin love (a recount of their SXSW debut in 1998 and his exploits with Murs and Blueprint). “Puppets,” “The Rooster,” “Shoulda Known,” “Painting,” and “Like the Rest of Us,” from last year’s When Life Gives You Lemons, You Paint that Shit Gold, dove even deeper into the character sketches of beat-up, beaten-down head cases Slug knows too well.

Austin stayed neck-and-neck with Slug’s cipher. The crowd got loudest at the show’s most predictable point, when Slug and crew – in lieu of demanding “some type of hockey chant” to bring them out from behind the curtain – seamlessly flowed between set and encore. “I’m not feeling that pretentious,” he admitted, but everyone in attendance knew the drill. They've been doing it for years, and Ant stayed true to his habits and ducked out for the first portion (“Not Another Day,” “Trying to Find a Balance”) of the encore. Back for Seven’s Travels closer “Always Coming Back Home to You,” the two playfully toyed with leaving the stage once and for all before a stage hand brought Slug a Budweiser and pushed him back towards the mic.

They closed with “Sunshine,” a rare cut of optimism in Atmosphere’s extensive catalog, and an indication that when you’re loved like they are down here, it’s not so bad flashing a smile once in a while. 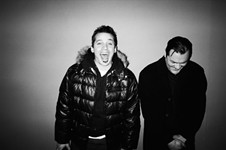