August Month for the Daze

If the Straitjacket fits...

After the premiere of Bandslam tomorrow night at the Galaxy Highland 10, something’s going to change for the Daze. It’s not just the killer, once-in-a-lifetime chance to dazzle a national audience onscreen – the Austin teens are following their cinematic good fortune with a CD release. The Daze – Evan Butts, Chris Ritchie, and Aaron Lemke – and fellow Austinites Joker perform live at the premiere.

The Daze's debut, Straightjacket Hymns, produced by Rick Del Castillo, doesn’t hit the streets until Aug. 27, and by then, they’ll be reaping the benefits of Bandslam’s back-to-school appeal. The Daze’s song “Blizzard Woman” is featured prominently in the film, and Straightjacket Hymns reflects the kids’ love of traditional hard rock a la Led Zeppelin and Bob Dylan as informed by contemporary influences such as Radiohead and the Black Keys.

All this will keep the Daze’s booking schedule full. On Aug. 11, they’ll be at Waterloo Records for an in-store performance, and the CD will be on sale for $5 when the Bandslam soundtrack is purchased. The Aug. 27 release party at Antone’s features the Bubbles and Blues Mafia; the Daze also performs for City Council that day at 5:30pm.

The joke I keep making that we’ve raised our own master race of musicians here in Austin isn’t really a joke. Bands like Blues Mafia, KJ Hines, the Bubbles, the El Guapos, Diving Captain, and the Steps have been on the forefront of the emerging teen band movement for several years, clearing the way for up-and-comers such as Edison Chair, Cipher Crew, and Mother Falcon.

For these Daze, it’s good to be in the right place at the right time. 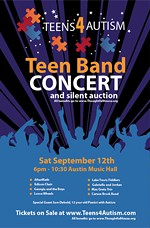