It was easy to feel old at Stubb’s last night. A crowd littered with tweeners and Longhorns subbed lighters for cell phones – when they weren’t busy texting – in welcoming Asher Roth, rap’s greatest proponent of higher education. The skinny white dude from outside Philly returned the favor, putting up a set made perfect for the ADD ways of Generation Next.

The final tally on Roth’s non-SXSW Austin debut amounted to (in no particular order): two miniature Uncle Sams making it rain during “Sour Patch Kids,” one choreographed dance to Soul 4 Reel’s “Candy Rain,” three callouts for Colt McCoy and Longhorn wide receiver Dan Buckner, one song (“Lion’s Roar”) in which hypeman Brian Langley dressed up like a lion, 30 girls on stage for “She Don’t Wanna Man,” and one giant plastic blunt that looked like Fred Flintstone’s club. There was also the pre-requisite, “I Love College,” the Weezer-spoofed megahit to which Roth owes the full extent of his fame.

Roth only made it through half of this year’s Asleep in the Bread Aisle, much in part to Kid Cudi’s showing up 40 minutes late – a bad move if you’re in the middle of a four act set and have to deal with Stubb’s early curfew. The Man on the Moon did everything in his power to evoke the ways of mentor and G.O.O.D Music label head, Kanye West, coming out to OutKast’s “Chonkyfire” before a size-of-the-stage LCD screen flashed fireworks, planets, and Kid Cudi Astronauts, sights similar to that of West’s 2008 Glow in the Dark Tour.

Yet, the Kid from Cleveland made good in all of the places West’s gone sour, selling the 808s & Heartbreaks aesthetic into something less emo and more creative. Over 45 minutes, skimming cuts from his upcoming Man on the Moon: The End of the Day, Cudi sang, rapped and scatted, danced, and gyrated alone across the stage, taking control of a crowd that chanted “Cudi! Cudi! Cudi!” in waiting.

Early-goers Pac Div and B.o.B (or maybe Bobby Ray, depending on his mood) dealt with the arduous task of selling hip-hop with the sun still out, a challenge made more difficult by the excess bass thumping through Pac Div’s set and B.o.B’s lack of the Eastsiders he torched Peckerhead’s with over SXSW. The latter did nothing to halt the Atlanta native’s charisma, who eventually picked up a guitar for one song. In his words, “Not playing guitar in Austin is like going to Vegas and not gambling.” 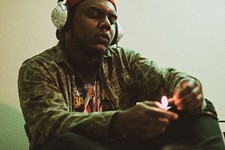 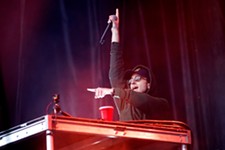