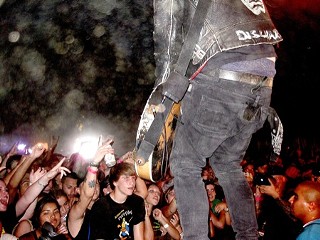 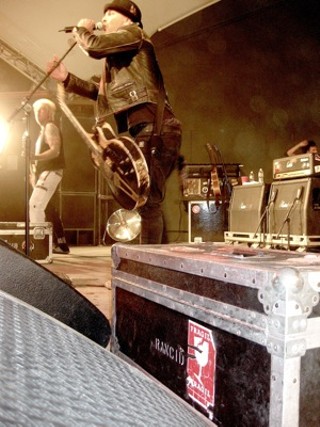 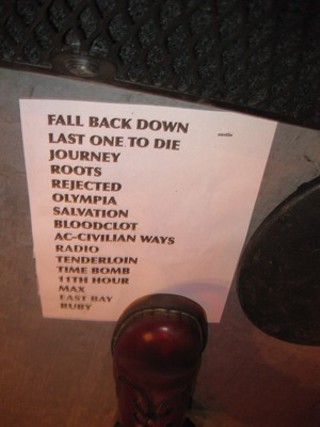 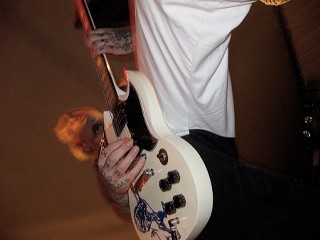 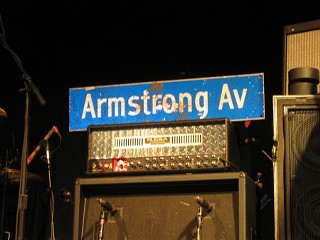 Lint does his thing, crowd goes wild. (by Marc Savlov)

Nearly a quarter century after legendary East Bay/Gilman Street ska-punk stalwarts Operation Ivy imploded, guitarist Tim "Lint" Armstrong and bassist Matt Freeman are still kicking three chords and the truth as the backbone of Rancid, the closest thing to The Clash going these days, and one of the few old-school punk outfits (along fellow Gilman St. alumni NOFX and Green Day) to consistently blow both minds and eardrums. Somewhere, Joe Strummer is grinning.

Friday's capacity gig -- peppered with at least three generations of Lookout! Records fans and more than a few punk rock dads, their pre-pubescent offspring atop their shoulders -- was a textbook example of DIY punk rock 101. Sell out? Nah, mate, sold out was more like it, as an instant, nicely apocalyptic dust-storm, kicked up by the furious footwork of 2,000-plus die hard fans, roared their approval to sing-along set opener "Fall Back Down" and anthemic single "Last One to Die," the latter off the new, Brett Gurewitz-produced Let the Dominoes Fall album.

Straddling the monitors and , Armstrong's trademark whisky-and-dustbowl vocals have aged like a fine 40 oz., a furious hybrid of joyously hoarse delivery and iconic porkpie-hatted panache that's as remarkable for its consistency and it's overriding spirit of '87. Punk dead? Nah, mate, the smell's something in your underpants. One pressing question, though: Does Armstrong have a Dune stillsuit beneath that omnipresent black leather jacket? At fahrenheit 98, heatstroke would seem inevitable.

Rancid's trademark musical amalgam of hook-laden Oi!-isms, reggaefied rock steady, and sheer punk rock passion remains unrivaled in a scene littered with pre-fab pop-punk palaver. And with a set list that mixed-and-matched classics "Roots, Radicals," "Salvation," "Radio," and "Timebomb" with more recent but no less insta-classic tracks "Another East Bay Night," the explosive acoustic intro of "Last One to Die," and "You Want It, You Got It" ("Some live a life of indecision/Strung out on petty schisms/I heard GBH, I made a decision/Punk rock is my religion"), it was as if emo never happened and Punk and Disorderly still ruled the maximumrocknroll roost.

Set closer "Ruby Soho," with its audience-driven acapella chorus, brought down the house in deafening style and utterly tuneful chaos: Destination known, and appreciated: "Through the good and the bad/There ain't no doubt/We knew from the very first show/What it was all about." Punk fucking rock, dude, punk fucking rock.