Back to Max Yasgur’s farm 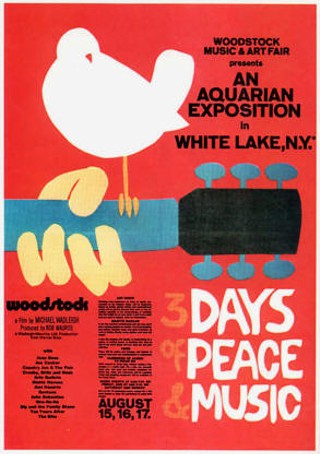 When I wrote about the 40th anniversary of Woodstock during this year’s South by Southwest, little did I know it was the beginning of a media blitz. The panel centered on the reissue of the Academy Award-winning film, finally released this week in three different configurations.

The 40th Anniversary Ultimate Collector’s Edition comes on Blu-ray and DVD, with a mess of memorabilia (like a 60-page reprint of Life magazine’s commemorative issue), a nearly four-hour director’s cut of the film on two discs, and another disc containing nearly two-and-a-half hours of previously unseen performances. The Blu-ray version contains additions that allow you to customize some of the content, meanwhile those that are only interested in the film can get it in a relatively low-priced two-DVD set.

The director’s cut of the film adds performances from Canned Heat and Janis Joplin and extends the Jimi Hendrix performance by several minutes, but what continues to stand out, aside from mesmerizing performances by the Who and Santana, are the glimpses of humanity, from the stoned and muddy attendees to the performers and producers backstage to the townsfolk, who reacted in unexpected ways and with unprecedented results.

Of the previously unseen performances on the third disc, a 40-minute “Turn On Your Love Light” by the Grateful Dead is mesmerizing. It’s obvious why this wasn’t used in the original film, as the lighting for the performance is much too dark. Three rough and rowdy songs from Creedence Clearwater Revival are a highlight as well. For those of us who weren’t there, this is as close as we’ll get to experiencing 1969’s three days of peace and music, showing why it galvanized a nation and remains a cultural touchstone that has yet to fade.

Additionally, a couple of labels have latched on to the anniversary. Rhino just reissued the original chart-topping Music From the Original Soundtrack and More: Woodstock and its follow-up, Woodstock Two, on CD. In August it will also release Woodstock 40 Years On: Back to Yasgur's Farm, a six-CD boxed set with 38 previously unreleased recordings, presented in chronological order.

At the end of June, Sony Legacy will be showcasing five acts who performed at the festival with unique sets they’re calling The Woodstock Experience. These two CD collections from the Jefferson Airplane, Janis Joplin, Santana, Sly & the Family Stone, and Johnny Winter will contain one disc with their studio album from 1969 and one with their complete festival performances, featuring many previously unreleased tracks. The Sly Stone set, which includes Stand! and seven unissued live cuts, seems exceptionally tasty.

Lastly, Sony Music and Woodstock Ventures have launched woodstock.com, which they describe as a "live music social network," hoping to bring "Woodstock Nation," whether from 1969, 1994, or 1999, online. It’s a noble idea, but another social networking site built around music, no matter what its premise, seems like a hard sell.