Something in the Air

There must be something in the air. While writing about Jesse Sublett’s Howlin’ Wolf tribute at the Continental, it made me smile to see Kathy Valentine and Walter Daniels on the bill (Jon Dee Graham had to cancel). Along with Sublett, they were veterans of Austin’s original punk scene, whose survivors have gone on to create astonishingly diverse music.

Layna Pogue zips into Austin this weekend for the re-recording of “Do You Have a Job for a Girl Like Me?” with the never-say-die Delinquents, reports both Brian Curley and the lovely Miss Pogue. I must be among the 563 people who remember that song, a divine bit of jittery, Farfisa-driven punk rock from about 1979. “Alien Beach Party,” on the flipside, was pretty catchy, but didn’t match the joy of screaming “I blew out my brains on LSD!” along with the lyrics. Hope it comes out on vinyl again.

And if you remember the Delinquents (yes, Lester Bangs was their next lead singer), maybe you remember the Reversible Cords. The Re*Cords, as they were better known, were an anarchic quartet, given to street performances and occasional scrapes with the law. Vocalist Lynn Keller gave them their powerful voice back then, and in the early 1990s, she formed a short-lived but memorable group called St. Cecilia.

Last year, Keller's album Fire of Devotion became one of my favorites. Under the name Ishwari, she and her partner Sruti Ram have created a rich and compelling musical offering in Kirtan music, the chanting of sacred Sanskrit names to musical accompaniment. It was an unlikely choice for me; though I love many forms of religious music, the sometimes nasal tone of Eastern vocals doesn’t much appeal to me. Ishwari has blended Western instrumentation and her rich vocals into the traditional form and rendered it deeply moving in the manner of Loreena McKennitt’s otherworldly music.

On Saturday, Ishwari and Sruti Ram perform at the Austin Yoga Institute (1122-C South Lamar Blvd). They are sweetly dedicating their show to Nick West, noting in their mailer that West was “a Siddha yogi who recently left his body.” In another lifetime, West was Larry Dixon, the publisher of Sluggo! during the punk days.

And the wheel keeps turning. 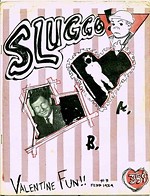