Torch of the Mystic 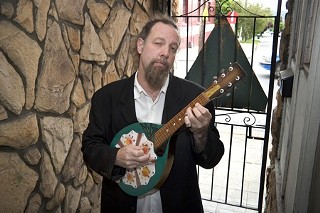 I just finished reading Sun After Dark, a collection of stories by Pico Iyer on traveling abroad. He opens one passage: "To travel through India today, especially if you are following it through its English-language signs, is to see at every turn one culture getting under another's skin, and into its heart and mouth and dreams. And the effect is intensified because the cultures of South Asia seem never to throw anything away."

I thought this explained Sir Richard Bishop's modus operandi. Through his time in Sun City Girls to his solo work, Bishop has taken disparate influences, many culled from time spent abroad, and channeled them into the sacred and profane. The Freak of Araby, another meditation on Middle Eastern music, puts him back with a full band.

Bishop and his ensemble hit Mohawk on Thursday, June 4, with locals Many Birthdays opening. Via email, he held forth on his way of magical and musical thinking.

Schadenfreude: Having spent much time in India, does the music still seem foreign or mystical?

Richard Bishop: The music of India has always felt somewhat mystical to me but it has never seemed foreign at all. On the contrary, it sounded oddly familiar the first time I heard it and because of that I was instantly affected by it.

S: Is that what keeps drawing you back there?

RB: I keep returning to India because of this familiarity but also because of the fact that it’s just a grand adventure every time I visit. You never know what’s coming around the next corner. It could be an over-the-top musical procession; a dead body, scented with sandalwood and covered in flowers, being taken to the river to be burned; a hash-induced haze of sadhus walking naked to a temple; a communist demonstration; a leper colony; a bevy of women dressed up as terrifying Goddesses; a Tibetan mask dance, etc. It’s the unpredictability of it that attracts me. The energy there is intense and it’s always mind-blowing.

S: Any interesting stories from the last time?

RB: My last visit there was a couple of years ago and I spent some time at a Tantrik festival in Assam state, where they celebrate the annual menstruation of the Great Goddess. The festival is a massive gathering of holy men and women (Yogis and Yoginis), all dressed in their finest saffron or red garments, who congregate on a hillside temple complex to honor the Goddess Kamakhya, whose main symbol is the yoni (vulva). Her main shrine is located underneath the temple where a natural, vaginal-shaped cleft in the rock oozes with a continuous flow of water. During the festival this water turns red, symbolizing her period. A lot of “internal” events took place while I was here. There was sort of a permeating dark energy on that hilltop but it was still a pretty magical atmosphere any way you look at it.

S: How did you hook up with your ensemble?

RB: I went into the studio intending to record a number of new songs that I had recently written, which were not in any way songs from the Middle East. I also intended to play all the instruments myself. After the first day I decided that the album needed to be all Middle Eastern-style music, so I came up with a few new ideas and improvised a bit on some older ideas. I then called in three Arab players to help out on bass and percussion with these songs and some others I wanted to do. They were very helpful that first day but couldn’t return the following day because two of them had work visas that had just expired and they couldn’t get them renewed. So [engineer] Scott Colburn and I added extra percussion and I finished all the bass parts myself.

S: Why have you been drawn back to a band and electric guitar?

RB: I had been getting tired of doing just solo acoustic shows and when Sun City Girls ended after Charlie’s passing, it was difficult for me to think about working with other musicians in a live setting because I knew it could never be the same as it was. But now that some time has passed and I have come to terms with everything, it was time to move forward. In order to play these new songs live I needed to find a group of musicians who I could rely on and who would be able to take these songs and give them life. I found that the members of Oakland band Oaxacan, who are opening up shows on this tour, would be the perfect accomplices.

S: Do you ever think of guitar playing in terms of technique, or do you still prefer to improv?

RB: I don’t think about technique at all. I’ve never had any real musical training so it’s always been a feeling of "just jump in and play and see what happens.” I do enjoy improvising most of the time but with the new songs, especially during the recording, there wasn’t a lot of room for improvising freely. For the tour we are making some adjustments in order to open things up a bit, and we want to keep it as raw and loose as possible so it will be different each night.

S: Can one ever "master" the guitar, or is it the other way around?

RB: Some people have claimed they’ve mastered it but it’s usually in relation to a particular type of playing or style of music so it doesn’t really count in my book. But I have no intentions of ever mastering it because that’s just not my approach to any instrument. Besides, I believe there’s still plenty that can be done with the guitar that hasn’t been done yet.

S: Does songwriting ever feel like compulsion to you?

RB: Not really. I don’t consider myself one who “writes” songs. In fact, if I sit down and try to do that, nothing much comes out of it. Most of my songs write themselves in an odd way and usually grow out of improvised bits that I sort of remember after I play them. It’s a backwards type of approach but it’s the only way I really know how to do it. For the new record, I did sort of “have” to write some pieces or rather, kind of make them up in the studio, but again, a lot of this material came from ideas I had previously utilized in one way or another during a live set or just messing around at home.

S: I saw the excellent show you and Alan did for Charles [Gocher, Sun City Girls' drummer] last summer at Emo's. Was there some closure from that?

RB: It was a difficult tour to do because of the emotions that were involved. It took us over a year to actually start the tour. And we had gone through our own mourning period up until then but we weren’t necessarily prepared for the emotions we encountered from friends and fans. There were a lot of tears and grief counseling on that tour, so it was rough. But it is something we promised we’d do and we had to do it for Charlie as a simple matter of love and respect. So yes, it was definitely a cathartic process, but I’m not sure I would want to do it again. I feel that that particular book is now closed.

Relaxo This Weekend
A whole lotta shaking on the Eastsiiiiide.