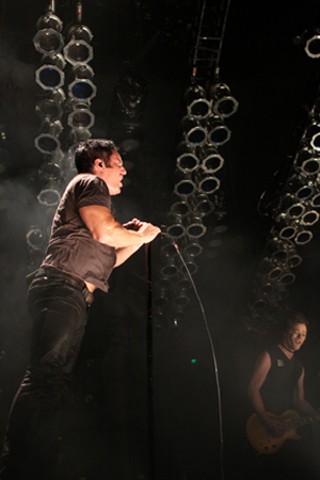 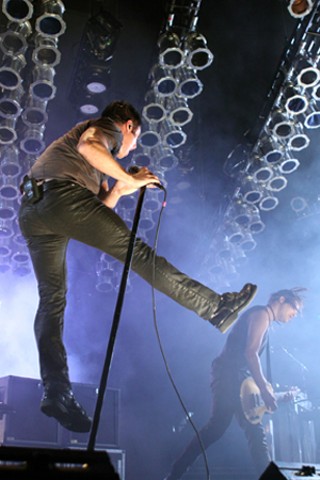 When I first learned of the NINJA tour, I was really excited but a little perplexed. Nine Inch Nails playing before Jane's Addiction on every stop of the tour led to further confusion. The pairing seemed odd, but eventually made sense – Jane's had offered NIN a spot on Lollapalooza more than 15 years ago. And since neither is touring in support of a recent album, I was geared up for a grandiose night of set lists pulled from a long list of solid albums. When my editor asked me to photograph the show, I was even more excited. Ok, I won't lie. I jumped up and down for a good five minutes.

The day before I couldn't sit still. I even had a dream that I lost my memory cards and pouring rain killed my equipment. Nine Inch Nails is my favorite band. This was going to be my 17th time to see them. It's all I could think about. Shooting Jane's was added incentive. There's nothing more fun and fulfilling than taking photos of a band that really knows how to perform.

I arrived early, full of nerves. Preparation included five gigabytes of extra memory cards, three extra batteries, and obsessively cleaning my lenses. My escort came to meet me and we walked through backstage to the photographers' holding area. About 30 feet from the door, I silently crossed paths with Mr. Reznor himself. This did not help my nerves.

Backstage, waiting for Nine Inch Nails, I cleaned my lenses again. I checked my batteries. I put the extra memory cards in my pocket. I wondered what they would open with. I sent mind signals to Trent to "please, please, PLEASE play your cover of Gary Numan's 'Metal'," which had been played on the first night of the tour. Just for good measure, I added, "And if you're feeling up to it, 'Perfect Drug' would be grand." I wondered how the set would feel with the middle time slot. I assumed the light show wouldn't be as amazing as the Lights in the Sky tour. I was right.

The photographers were herded to the side of the stage for the first two songs. A man I am certain has the ability to kill someone with a simple glare explained to us that we would have three songs to shoot. The shooting would be "at your own risk." Photographers have the misfortune of facing the wrong direction while dozens of people fly out of the pit. I was really trying to listen, but "Mr. Self Destruct" had just finished and the stage was spitting smoke and NIN was starting "Sin."

I was finally ushered in for "Terrible Lie," "March of the Pigs," and "Heresy." Oh, holy crap, "Heresy"! The smoke was inhaling me. The lights were blinding me. I kept thinking, "I have never loved being a photographer more in my entire life than this very moment." Then it was over. We were escorted out. I almost took out Reznor's tambourine stand on the way out. The nerves were still there. In fact, they didn't go away until I flipped through the photos and realized that I had good shots. It's kind of the ultimate test to shoot your favorite band. I've seen thousands of photos. At every show I've attended, I've seen images I would die to take, but not possessed the sacred photo pass to give me the right.

I hurried to my ninth row seat to watch the rest of the show. I was slightly disappointed with the set list. It seemed front-heavy. The slower songs in the middle seemed bare without the normal NIN lights or curtain projections, and the order was disjointed. Highlights included "I Do Not Want This" and Joy Division cover "Dead Souls." Fifteen minutes after closing with "Head Like a Hole" and no encore, Trent tweeted "Not one of our better shows. Despite our efforts we seemed unable to win over the crowd. Texas ends with a whisper."

Bummer. He's been hinting for months now that this is the last tour of Nine Inch Nails. I would like to take this moment to let Trent know that Austin loves him very, very much and to please, please, please come back before officially waving goodbye.

Jane's Addiction gave photographers two songs to shoot, which was really like four songs because they opened with "Three Days." Trying to choose between snapping Dave Navarro or Perry Farrell felt like being a parent trying to choose a favorite child. Despite having a torn calf muscle, Farrell bounced around the stage prancy as ever. Navarro chain smoked and looked hot. The Erwin Center had traveled back to the Nineties.

A charming story about finding an outfit to celebrate Austin's weirdness led into "Been Caught Stealing." The curtain flew half-mast for visuals accompanying a stellar performance of "Ted, Just Admit It." Farrell shimmied around, drank wine, gave a shoutout to Charles Attal, invited the entire crowd to Lollapalooza, and seemed genuinely happy to be in Austin. The encore opened with "Summertime Rolls" and was easily my favorite performance of the night. The night closed with "Jane Says." 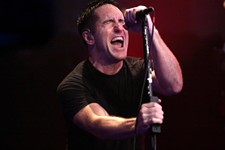 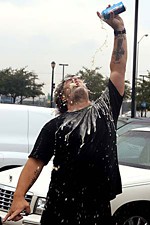