The Head Cat himself, Motörhead’s Lemmy Kilmister, talks in his sleep. 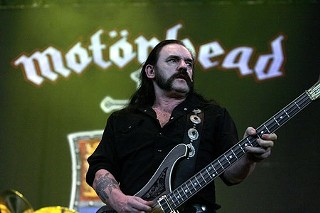 We’ve all had bad interviews, where every question pitched results in a one-sentence answer. My 10-minute phoner with Motörhead’s Lemmy Kilmister wasn’t one of them. The man was simply talking in his sleep.

3pm’s an ungodly hour for anyone, but Lemmy was still game – just not very awake for the first eight minutes of our conversation. Lovely bloke, though, especially when you realize he’s just a few years off the British Invasion lot. Think Mick Jagger’s going to give you even one-sentence answers? Not on Her Satanic Majesties Request!

At the Nutty Brown Café on Saturday for the 2nd Annual Texas Rockabilly Revival, Lemmy’s psychobilly side project with the Stray Cats’ Slim Jim Phantom and guitarist Danny Harvey as the Head Cat anchors a two-day bill starring “Fujiyama Mama” Wanda Jackson on Friday and the Rev. Horton Heat the next night. (Though note the note on the website linked above where it's noted that one of the Head Cats is sick and therefore might force cancellation of the gig.)

One would have thought that the singer/bassist had enough on his hands with that other band of his.

Expansive, Lemmy Kilmister? Not exactly. Fun to riff with, you bet your “Fujiyama Mama.”

Austin Chronicle: How did the Head Cat come about?

Lemmy Kilmister: Slim Jim rang me up and told me that Johnny Ramone wanted us to do a track for an Elvis tribute album that he was doing, so we went down. It was Jim and Danny I was playing with. We did a couple of Elvis songs and then we just sat around fucking around in the studio, playing songs we used to know. Jim was in a revival band of rock & roll, so he knows all the songs. We were just having such a good time that we decided to do an album.

AC: You’re the generation for whom Elvis Presley is ground zero.

AC: What was your first exposure to Elvis?

LK: It was a record, obviously, because there were no videos in those days. There was very little in the way of TV as well. You didn’t get people you liked on TV. It was very much a case of dance music and bullshit like that. I think it was a movie, actually. Loving You, I think it was.

AC: Then rockabilly is your musical foundation, isn’t it?

AC: There’s probably at least a generation of Motörhead fans that have maybe never even heard the word “rockabilly”!

LK: Well in that case it’s a good thing I’m doing this now!

AC: Musicians often talk about educating kids about music. Is Head Cat a case of you doing just that?

LK: No, it’s just me having fun [laughs]. I’m selfish, you know. There’s no message for kids.

AC: Is there much difference between playing rockabilly in the Head Cat and what you’ve always done in Motörhead?

AC: I caught Motörhead in San Antonio last year with Judas Priest and Heaven and Hell and marveled that you could still hammer it out the way you have for decades now.

AC: Ever see a point where you’re doing solo shows, just you and a guitar?

LK: I don’t think so. There’s a certain limited appeal to that shit [laughs].

AC: Great thing about rockabilly is that it rocks no less hard than heavy metal.

LK: That’s very true. I always said that. A lot of people can’t see that at all. You know, they just hear the recording technique and the limited instrumentation. But the excitement is what it’s all about.

LK: Black is right, ‘cause that’s where the two met up, black and white. It’s fucking Rosemary Clooney on one side and Big Bill Broonzy on the other. It really didn’t mesh [laughs].

AC: If you grew up on Elvis, country music couldn’t have been that far behind.

LK: Country was fine with me and it still is now. I still listen to a bit of country, you know. Also, don’t forget people like Little Richard. I mean Little Richard is the most sublime rock & roll voice I ever heard in my life – still. There’s still nobody to match him if you want to talk about wild.

AC: Any type of music you listen to that might surprise people?

AC: You’re obviously playing the Texas Rockabilly Revival, but how many other dates will this tour encompass?

LK: We’re just doing that one, actually, because I have to go on tour two days later.

LK: Yeah, I have festival dates in Europe and then I have a U.S. tour in September.

AC: Do you get tired just looking at that itinerary?

LK: No. No, I like to see some places we haven’t been in a couple years: “Wonder if that chick’s still not married?” [Laughs]

AC: Do you have good history with Austin?

LK: Austin’s a great town. I always liked Austin. First time I heard about it was from Johnny Winter. I think the first time I played there was when we were on tour with Slayer.

AC: Was your coming to the U.S. the first time a case of finally getting to see the land of all your musical heroes?

LK: Yes, of course. That’s always true. It’s the same if you go to London. You have to go see the Tower of London, right? It’s one of those things. You can’t help being a tourist the first time. It was always a treat to see places that were just mystical to you. You’re a kid in Wales, and I don’t know if you know anything about Wales, but it’s kind of like Rhode Island without the excitement [laughs]. It was pretty sparse up there, so I used to order records from an electrical appliance store. There were no records stores. I’d wait three weeks and then they'd come in. I used to get stuff like Ritchie Valens. I remember I got “Donna.” That was on Del-Fi, in Hollywood. I thought, “Wow, Del-Fi. That’s real American.” You could never get that in Europe, stuff like that. The Everly Brothers were always big with me too.

AC: Given you musical foundation, I’m wondering where for you the gene jumps from roots to something as aggressive as Motörhead.

LK: See, music steadily got more aggressive as the amplifiers got bigger. Heavy metal was the first thing to have an immense P.A. In fact, I was on the first tour when I was roadie-ing for Jimi Hendrix. We were on the first tour that had a massive P.A., which was because Pink Floyd had brought its own P.A. It consisted of about 50 of these fucking eight-by-10-foot speaker cabinets that these two guys in white – like doctor coats – were looking after, technicians. Isn’t that weird? Those poor bastards had to load all this shit in and out of the truck and pile it up every day. I’m sure they wanted to cut the Floyd’s throats by the end of the tour. That was the first time I ever saw a real big P.A. The next one was a little better done. It was Deep Purple. I think they started out the big sound.

AC: Was there ever a point where you might have headed down a different musical path - been a member of Fairport Convention or something like that?

LK: Well, I wouldn’t have been good enough for Fairport Convention [laughing heartily]! I was a really mediocre guitarist for a lot of years. Then I became a fairly good bass player. I should’ve begun with the bass instead of spending all those years fucking around with the guitar hopelessly. It’s funny what your choices are. I could’ve been in a lot of different bands. I like playing music. I could have been in Head Cat from day one, a band like that. I could have been in something like Fairport Convention. I wouldn’t bother me. In the end I would’ve had to push my way to the front, which would have probably gotten me fired anyway. I had to form my own band to stop getting fired. I got fired out of every other band I was in.

AC: So forming your own band was a self-defense mechanism.

AC: When you play Head Cat shows are there metal heads calling out for Motörhead?

LK: You get the occasional dipstick that’ll do that, but I mean they should realize that it’s not Motörhead and that we’re not going to do “Ace of Spades.”

AC: Do y’all do traditional material or original?

LK: A lot of our stuff is Buddy Holly. We do a lot of Buddy Holly. He’s my favorite, always. The first album I ever bought was Buddy Holly. He lasted a lot longer over here than there. In England, he was dead in the water after “Maybe Baby,” though they’re still releasing posthumous stuff in England. Yeah, I love Buddy Holly. He was the first good guitar player; him and Eddie Cochran. He was the first one to really explore different vocal sounds. He was always interesting. You could always rely on him. There’s only three of them as well. I was impressed by that – the Crickets. It’s a helluva sound when you think about it, especially when there was no overdubbing worth a damn. It was probably done on two tracks most of it.

AC: And Eddie Cochran, too, such hot-rod music.

LK: Yeah, on borrowed studio time. He used to work at a studio in California, I hear. If somebody went home early, he’d sneak in and use the rest of their time up [chuckles].

AC: Is there one song that epitomizes rockabilly for you?

LK: I would say Carl Perkins, because he was the King of rockabilly if you ask me. “Gone Gone Gone.” [Singing], “That must be your girl, man, don’t look like that.”