Church of the Friendly Ghost hosts some lady friends 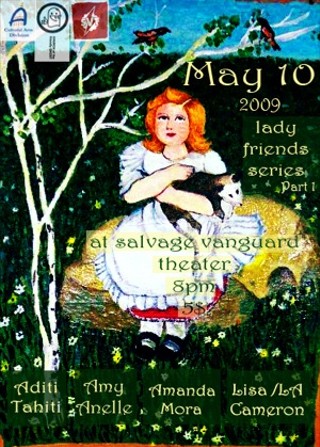 Alissa DeRubeis was sitting at one of Church of the Friendly Ghost's workshops on running live sound when she had an epiphany. "It was me and eight or nine other men," she recalls, "and there was a spot open to curate a series, and when the guy next to me leaned forward to say he wanted to do one, I couldn't help myself. I said, 'Me!'"

That moment of clarity hatched a monthly summer series focusing on local female artists, the first of which starts Sunday at the Salvage Vanguard Theater. DeRubeis and her curating partner, Amanda Lewis, hope to incorporate art, film, and dance as well in the months to come, but they clearly had no problem finding diverse musicians for the inaugural show.

"Lisa Cameron, I love watching her make music," DeRubeis says. "Aditi Tahiti, not many people know her name yet, but she's a great experimental talent. Amanda Mora's perhaps a bit more representative of female musicians in this area; she comes from a musical family and lives out in the hill country. And Amy Annelle just has a great voice, So, I hope it covers a few bases."

The Lady Friends series continues monthly through August, and after that DeRubeis hopes it will be a more regular feature on CotFG's calendar. Either way, it's something Austin needs more of, and DeRubeis' "Me!" moment certainly paid off. "I don't think women are intentionally underrepresented," she says, "but it's apparent, so it's time to be intentional about opening doors."

What the Bleep
Circuits get bent, Furbys are forced to sing - take that, robotpocalypse