Asleep In My CD Player 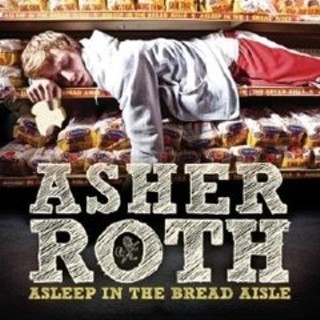 Comparisons between Asher Roth and Eminem start at skin color. They are, simple as fact, two white rappers. Because of that every link that’s been made between the two deserves an asterisk, for their individual talent levels are so distantly separated that had one been of rap’s traditionally predominant race there would be no connection between the two.

Eminem is a lyrical phenomenon, a master of rhyme schemes and inverted phrasings. He's unleashed a fury of emotion, psychotic ramblings, and previously unseen perspective. Time will tell what this year’s Relapse has to offer, but the Slim Shady and Marshall Mathers LPs were psychological cross-examinations, a time bomb exploding over the albums’ 38 collective tracks. And he rapped without a touch of hesitancy; Em cared not if you thought he was sick, twisted, mental, ill, or all of the above.

In his defense, Roth plays down the comparisons to Eminem. He even made a song about it: “As I Em,” on which he raps, “Cause we have the same complexion and similar voice inflection, it’s easy to see the pieces and to reach for that connection.” He tacks on, “Now don’t get it twisted, I’ve definitely benefited. It’s like suddenly everyone wants to hear what I’ve been spitting. It’s so different; the image they don’t get it.” It stands, unfortunately for Roth, as the only introspective and substantial matter covered on his full-length debut, Asleep In the Bread Aisle (SRC Records).

The rest of Asleep strays not far from the subject matter tying together “I Love College,” the once-Weezer-sampling party anthem that currently stands as Roth’s legacy. There’s the Andy Samberg-style triteness of “Blunt Cruisin’,” which details a smoking session in a Ford Taurus, and “Lark on My Go-Kart,” a testament to his Mario Cart skills and affinity for munchies. Failed sexual exploits are detailed alongside Keri Hilson on “She Don’t Wanna Man.” “Bad Day” recounts a bad flight on an airplane, something we've all had and probably don’t wish to discuss any further.

Fortunately, Asleep In the Bread Aisle has a crutch in Oren Yoel, the L.A. producer who oversaw nearly every beat on Asleep. Putting together a fantasy camp of guests (Cee-Lo, Hilson, Jazze Pha, Busta Rhymes, Don Cannon), Yoel manages to keep things somewhat afloat in the sea of extreme topical boredom. “Sour Patch Kids” rips like the Knux; Cee-Lo’s contribution to “Be By Myself” sounds eerily Gnarls Barkley-esque; and “Fallin” cleverly samples Ben Kweller’s “Falling.” It’s enough to drown out the banal meandering in which Roth engages.