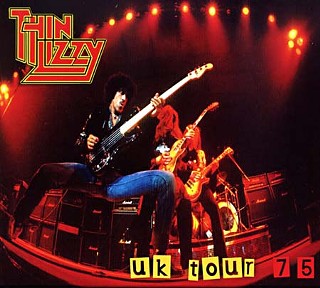 When new Thin Lizzy live disc UK Tour 75 appeared both as an import on Amazon last year and in the pages of Mojo, at least one economic downturnee couldn’t afford the $35 gamble. Then Still Dangerous pounced into the marketplace and between recent reissues, talking with Lizzy axeman Scott Gorham, and being assured by an Austin Record Convention buddy about Amazon’s “new and used” option, it arrived in a boutique Digipak in under a week – last Saturday – for $14, with shipping and handling. Its 78 minutes are priceless.

“Yeah, one – testing,” rises Phil Lynott’s voice in the monitors immediately. “Yeah this is our second time here [Derby College of Technology, Derby, England]. Tonight’s gig is going to be recorded, so make a lot of noise. Hear yourselves on the radio.”

Though UK Tour 75 kicks off with what Gorham calls a “clam,” the sour note opening “Fighting My Way Back,” Lizzy’s still nascent ‘classic’ line-up soon storms the tower, blazing and bucking like only Thin Lizzy could. Gorham marvels at how good the band sounds despite having been together for only over a year, yet all one has to do is amplify the two discs this Lizzy grouping had already cut to nod knowingly at the liner notes herein by the group’s second-in-command, drummer Brian Downey:

“Four months later, the Jailbreak album was released and we were into another era.”

Best thing about UK Tour 75 is the set list: nine of its 14 performances reap 1974’s Night Life and the following year’s Fighting. The final track, a two-minute sound check jam, swills the Cognac capper. Thin Lizzy’s peak years, from 1976’s Jailbreak ‘til the bitter end seven years later, remain well documented live, but pre-“Boys Are Back in Town” live Lizzy is a scarcer beast. UK Tour 75 might sound as if its preservation came at the hands of some college radio station, but it’s radio nonetheless, and all the holier for it.

Hard funk rocks Night Life’s gnarly “It’s Only Money,” which Johnette Napolitano and Concrete Blonde had the exceptional taste to cover on their second album, 1989’s Free. Night Life also kneels for Lynott romantic standard “Still in Love With You,” spinning nine minutes of solid gold here. Best of all, the album’s R&B slicker, “Showdown,” rips like “boot boys” dashing toward the World Cup of their dreams.

Belfast footballer Georgie Best gets his due on Fighting’s sophomore slot “For Those Who Live to Love,” Lizzy’s dual guitars for those who live to slice and dice. Fighting birthed the act’s soaring six-string harmonies in earnest, “Whiskey in the Jar” follow-up single “Wild One” uncorking some of Gorham and Brian Robertson’s lethal chemistry. Derby, UK, also gets Bob Seger cover “Rosalie” shaping up her razor sharp Live and Dangerous curves.

“My name is, uh, Philip Lynott, I’d like to thankyouverymuch,” humbles the lifelong Elvis fan during a typically lashing “Me and the Boys.” He pronounces his name “lie-knot” as opposed to “lih-nit” as I was once assured. As the band intros recede, in fades a familiar lope.

“This is a new number, this one, as yet untitled,” offers Lynott, Downey’s liner notes assuring us that Lizzy “normally didn’t preview new material on the road.” The singer doesn’t even have a working title. “We’ll call it ‘Derby Blues,’” he shrugs. Never have Lizzy acolytes heard this lyrically embryonic version’s many verses. “Electric Chair” might have been a better working title for these bring-a-tear-to-your-eye seven minutes.

Proper closer “Little Darling” smokes four-alarm directly afterward, but “Derby Blues” still has your hankie out. The two guitars, Gorham and Robo, loping, loping, loping, then bursting off the cliff like Butch Cassidy and the Sundance Kid.