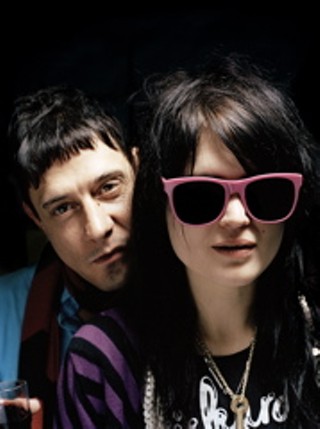 The appeal of the Kills’ lo-fi electro-sleaze boils down to the violently suggestive and sexually abrasive friction between guitarists/singers Alison Mosshart and Jamie Hince. The duo mastered the art of their latest, Midnight Boom, and has since toured the country three times over, including a broiler room meltdown at the Parish and a similarly blistering set at the 2008 Austin City Limits Music Festival. The Kills recently released a three-song EP, Black Balloon, and hits Emo’s tonight with the Horrors and Magic Wands. While Mosshart declined to discuss the Dead Weather, her new project with Jack White and members of the Queens of the Stone Age and the Raconteurs that debuted recently in New York City, OTR salvaged a few remnants from his interview.

What was different this time around for the Midnight Boom sessions?

Alison Mosshart: It took a long time, but unintentionally. We went and wrote it the same place that we did for No Wow, but we tried a few different processes first. We started in L.A. where we worked with a producer for about four days and couldn’t stand it. We left L.A. 'cause we couldn’t stand L.A. Then we went back to Michigan, a place we know and love. There’s a studio run by our friends and we basically lived there. There was no pressure about the studio costing $1,000 a day or a bunch of people running around. Jamie was trying to come up with different ways of doing drums, trying to actually program things instead of just doing loops. He was trying to sample things that he was playing and do things he had never done in that respect. We wrote a lot of songs and then narrowed it down.

OTR: How did you decide what made the cut?

AM: We probably had about 40 songs. “U.R.A. Fever” was the track that came right at the beginning. We thought it was really new an exciting. We didn’t really recognize it. I think when you hit on something like that it spurs you on. That was definitely the turning point for us. We tried to push things everything in that direction.

OTR: There’s a really great tension between you and Jamie [Hince] on stage. Does that carry over the rest of the time?

AM: We have a pretty strong relationship. We’ve known each other for a long time, and when we met we saw that we had this weird energy. That tension is really good for art. We’re both quite up and down, and we’re both quite secretive, but we’re almost always opposite each other. If I’m in a really bad mood, he’s in a great mood. It always balances out. It’s quite an extreme relationship. We’re together most days, and there’s only two people in the band so it’s really in your face. There’s no one to run away to and talk to about anything.