Chrome lines South Congress this weekend, in the street and clubs 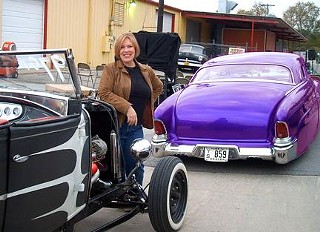 The Jalopy Journal calls it “the best damned car show in America,” and that ain’t just whistlin’ Dixie. For the eighth year, the Lone Star Rod & Kustom Round Up turns Austin into the loud-pipes-and-lead-sled capital of the world, and even throws a little music into the mix all this weekend.

Before bidding adieu to the old South Austin and relocating to the New South, I lived on Riverside Drive. My place was right below Downtown, and for the first four years of the Round Up I had a second row seat. The first row is always South Congress, when the cars start parking on Thursday around the Continental Club. By Friday morning, it felt like American Graffiti with a touch of Hot Rods to Hell. The scene had changed little when I was there last year. Cars jammed the South strip of Congress, chrome bumpers dazzling, skirts to the street, funny cars, metal-flake finishes – kustom jobbies till your eyes roll back and come up snake eyes.

The King’s men also perform the tribute at Threadgill’s World HQ that night, which is not on the official Round Up schedule, but alluring nonetheless. What is on the schedule for the evenings is the free stage at Jo’s Coffee with Midwest Monster and the Leroi Bros. with Jake Logan on Friday, and Eve & the Exiles with Huelyn Duvall and Chili Cold Blood on Saturday. Down the street, Trophy’s cranks up with the Ugly Beats, Jade Idol, and Jesse Dayton on Friday and on Saturday, shakes down with the Thunderchiefs, the Jungle Rockers, and Two Hoots & a Holler. On Friday, the Continental tops it off, natch, with more Marti Brom, Red Light Burlesque, and Johnny Reno’s High School Caesar, followed on Saturday by James Hand, T Bird & the Breaks, and an encore performance from James Burton.

And it’s not on the official Round Up schedule but Jimmie Vaughan’s show at Antone’s on Friday night features Omar Kent Dykes. Vaughan appears on Dykes’ new record and the two will try out some tasty new tunes and likely a number or two from their stellar Jimmy Reed Highway.

Lone Star Kustom Round Up