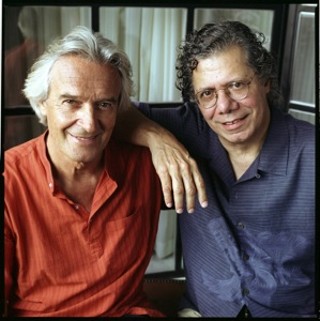 In a Silent Way: John McLaughlin and Chick Corea (r)

Chick Corea, Al Di Meola, Stanley Clarke, and Lenny White still burn in the fusion reactor memory of last May’s two-night Return to Forever reunion stand at the Paramount Theatre. In January, the Mediterranean stingray himself, Di Meola, returned, this time to the One World Theatre, where he broke off the axe portion of RTF and speared an intimate audience with Flamenco-stampeded slights of hand. Now comes El Capitan’s turn.

Corea, no stranger to the One World, instead loads into UT's Bass Concert Hall, this time with another six-stringer in tow, guitar mystic John McLaughlin. Two such jazz/rock pioneers could draw a symposium of sonic scientists all by themselves, only they’ve seen fit to gird the power of two with a trio of genuine all-stars. Kenny Garrett on sax will dislodge lung sponge, but in bassist Christian McBride and one of the best drummers alive, Brian Blade, the Five Peace Band come armed to the teeth.

The Miles Davis alum leading FPB have written new material, the 2-CD Five Peace Band Live previewing its summer release for Concord Records on sale in the Bass lobby, while also acting as another evolutionary leap forward in Corea and McLaughlin's decades-long history of collaboration. In Brian Blade alone, they’ve advanced their musical agenda 1,000 years. This Leonard Cohen disciple can only wring his hands that he won’t be at the PAC’s main lodge on Thursday, April 2, 8pm, to witness an alternate, but doubtlessly no less mind-blowing return to forever. Tickets here.