Rollin' in the green at Dog & Duck, Opal Divine's, and more

What better way to bring in St. Patrick’s Day on Tuesday than at the Dog & Duck’s annual bash? The beloved UT-area pub boasts a canny lineup for the day with trad Celtic acts – Black Irish, Capitol City Highlanders, Ed Miller and Rich Brotherton – then turns charmingly kick-ass eclectic with the all-star Magic Christian, the original Reivers (who were originally Zeitgeist) now playing as Right or Happy, 20/20, local buzz band T Bird & the Breaks, plus Sean Orr & Black Dagger, Band of Brothers, and Ian McLagan & the Bump Band. A most appropriate bill that starts out St. Pat’s and ends up South by Southwest.

The Dog & Duck has been around so long that its English pub atmosphere feels as authentic as the last pub I visited in London, which happened to be the utterly delightful Duke of Kendall pub with its weekly singalongs. Only when I think hard do I remember the D&D in previous incarnations, such as Mrs. Robinson’s around 1974. The rest of the memories are warm and perhaps a tad beer-goggled. I’ve always had a fondness for its nooks and cute waiters and proximity to Hunter Darby (who booked this killer lineup with Kent Benjamin). Free!

Besides the Dog & Duck, Ed Miller and Rich Brotherton also perform at all three Opal Divine’s on Tuesday, for those wishing for something a little Scottish among the shamrocks (and for the thrifty, it’s free). If it’s authentic Irish you want, hie thee to Fiddler’s Hearth for an evening of traditional folk fiddle music. This isn’t just local folks like Jeff Moore and the wonderful Johnny Gimble – Kevin Burke & Cal Scott and Brian Conway & Brendan Dolan bring the real thing to the heart of Texas. Also on hand are the Silver Thistle Pipes and Drums, the Clickety Cloggers, and the Irish Dance Center. All brought to you by the Celtic Cultural Center, natch. $10

Some of you don’t want to leave SXSW madness and that’s okay! B.D. Riley’s features music starting at 11am with Joe Gee. Performers that day include the almighty Spot with Albert, the Strayaways, the Irish Music Rights Showcase (7pm), and the Barley Guild at 9pm. Free!

On the Western end, Mother Egan’s hosts the Outlawed Pipers and the Emergency Services Pipes and Drums plus the Lost and Nameless Orchestra alternating sets throughout the day with a performance from the Irish Dance Center, plus the St. Baldrick’s Head-Shaving Showoff at 7:30pm. $5.

Still not enough for ya? Hang loose – the Blaggards hit Fiddler’s Hearth on Friday, and if that doesn’t kick yer pot o’ gold into gear, nothing will. 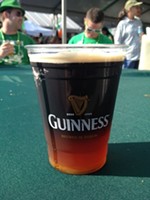