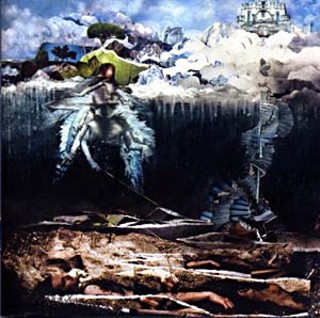 2 Empyrean, n (1667): 1a: the highest heaven or heavenly sphere in ancient and medieval cosmology usually consisting of fire or light b: the true and ultimately heavenly paradise.

Red Hot Chili Peppers guitarist and guiding light John Frusciante has spent his current inter-galactic guise exploring “ancient and medieval cosmology” like a skate punk Jimi Hendrix, although The Empyrean hosannas more heavenly ambition than six-string deity. Frusciante’s first proper solo album since his fall off the deEP end in 2004 – six radically different EPs and LPs in one year – The Empyrean also spins his most polished and sincere effort since the final Warner Bros. solo disc that preceded his prolific burst, 2004’s Shadows Collide With People.

If only The Empyrean ascended with more fireworks such as those that throw open these gates to paradise, “Before the Beginning,” with its nine-minute guitar solo draining blood into the fissures of an alternate Electric Ladyland.

“Song to the Siren” then plunges The Empyrean’s song cycle into its mythological groove, emotionally unfiltered and musically massaged by the album’s 1970s analog glow. “Unreachable” flows underwater electric piano, Flea on bass, atop Frusciante’s underground lava canyon, building brilliantly from unassuming to all consuming, and snapped shut at six minutes. “God” takes her deserved bow next, both demanding and promising everything, though it’s a heavy task for Fruciante in three minutes. “Dark/Light” follows first with Enyaisms and then the radiance of the New Dimension Singers keeping drum machine time. Soweto! Except for its ungodly length – eight minutes – which ultimately extinguishes the latter half of the track.

“Heaven” finds its buoyancy by band and string quartet, but better burns the Stadium Arcadium pop of “Enough of Me,” complete with a modestly blazing Frusciante axe solo. At that point, he’s finally on a roll. “Central,” another no-frills confection doubles once again as a well-built Chiliesque demo, this time a light-middleweight rocker that guests Smiths string-bender Johnny Marr on a silver lining of guitar. Frusciante’s vocal vigor – turpentine on oil – matches the song’s bash. When he sings profundo on follow-up “One More of Me,” the album's Sonus Quartet strings along another Frusciante vocal melody seemingly born from a piano and The Empyrean fires bright.

“After the Ending” should've closed St. Peter’s front gate with a guitar rather than more rock aria, and ultimately, The Empyrean inhabits the middle ground between Shadows Collide With People and the Smiths-y goodness of its predecessor, 2001’s To Record Only Water for Ten Days. More Old Testament guitar would’ve made The Empyrean truly empyreal.