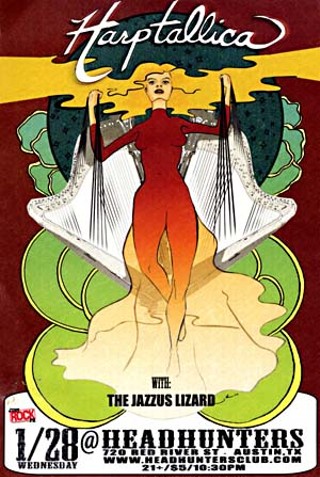 Apocalyptica’s Plays Metallica by Four Cellos in 1996 deserves as much blame as anything for strings cover albums from Queens of the Stone Age to Tool. Anybody’s guess why Slaye-

Such was the sonic, testosterone boom emanating out of Headhunters at half past the witching hour on Wednesday evening. Had you been stumbling past the corner of Seventh and Red River two frigid nights ago, you’d have thought human sacrifice had occurred inside the cigarette-choked tiki bar. Smoking ordinance, what smoking ordinance?

Happily, Ashley Toman hadn’t been thrown to the Lions of Tsavo. Instead, the petite blond lamb, dwarfed by her act’s two six-food harps crammed into the otherwise perfect wedge of a stage at Headhunters, had announced Harptallica’s branching into compositional territory other than Hetfield/Ulrich/Burton/Hammett.

“We’re learning some Iron Maiden,” Toman assured the still shouting throng. “What about Black Sabbath? Do you like Black Sabbath?”

Austin’s Jazzus Lizard whipped its tail prior to the headliners, while Powersquid blurted before that. The former act's baritone saxophonist Tom Kimzey led his local quartet through almost an hour’s worth of low, reptilian instrumentals, less a jazz circle jerk of traded solos than a rockist group meshing, drummer Snoopy Melvin barking his approval from back behind his kit. Was that “Puss,” “Nub,” “Boilermaker,” “Gladiator”? Jesus Lizard guitarist Duane Denison won’t be in town ‘til Wednesday at Emo’s with the Legenadary Shack Shakers so he wasn’t around to ID songs, but the Jazzus' closer bore the unmistakable bass line of Lizard expressionism. Shot’s “Skull of a German”? “Monkey Trick,” nodded Kimzey during Harptallica’s 75 minutes onstage.

Watching a couple gals wheel onstage two enormous piano slices under football player tarps equals something new on Red River. Where do you keep one of those things out on tour – in the motel double bed next to you? Holy Lord of the Rings. Accompanied by music stands and sheet music reading lights, the giant wooden instruments commanded their own respect. The moment Toman and second harpist Mollie Marcuson, another professional symphony classicist and teacher, ran their fingertips across the 47 strings of their upright keyboards, the room went silent. “Stairway to Heaven” began. Holy Love Mongers!

“This is Led Zeppelin, not Metallica,” pointed out one brain surgeon at the bar.

Just warm-up it turns out. When the ladies tugged out the repeat in “Master of Puppets” dudes went ape shit. “Fade to Black” was met by drunks shushing each other, while Ride the Lightning closer “The Call of Ktulu” evoked nothing less than disbelief. Toman’s solo bear-down on Kill ‘Em All’s “(Anesthesia) – Pulling Teeth” proved no less awe inspiring, head banging internalized by one big mother who silently mouthed all the non-instrumental Metallica lyrical fare with a smiling grimace in clear indication that volume bears no relation to sound interpretation. “Welcome Home (Sanitarium)” killed, but “Whiplash” sent Headhunters into frenzy. “For Whom the Bell Tolls,” “The Unforgiven,” and Master of Puppets’ “Orion” (“My favorite song in the whole world,” exclaimed Toman) did their parts to slow pulses down from stroke speeds.

Closer “Enter Sandman” met with boos – “That’s lame Metallica,” shouted the Looney barman – and yet the venue's entire front room sang along happily, with gusto. On one hand, Toman might want to reconsider novelty that puts her in front of metallurgy’s underbelly night after night in dives across metaldom. On the other, you can’t argue with Harptallica’s string “Battery.”