Keepers of the Flame Part 2 “I have a new band, the Eurythmics."

Gary Kurfirst sounded crackly on the Chronicle’s touchtone phone. I unwound the cord in hopes of making the connection better.

I figured if the manager of the Talking Heads, Ramones, and B-52s was calling me to say he had a new band, it was important.

This must have been around 1982, and the Chronicle offices had just moved to new digs on 12th Street. I was feeling mightily successful, churning out a gossip column for a 24-page biweekly that allowed me to haunt nightclubs and call it work. Part of the reason the Chronicle wanted me as their columnist was because I knew John Cale and people like Gary Kurfirst called me.

We’d been friends for about three years at that point, having met in 1979 at the Armadillo when he brought the Talking Heads and B-52s there for the first time. We were introduced that night and hit it off in that scratch-each-other’s-back way. He had the new hot bands, I wrote about them. Not too long after the Texas Blondes coalesced in Los Angeles in March of 1980, my roommate Virginia and I left an announcement on our answering machine that said, “Don’t leave us any messages unless you’re one of the RAMOOOOOOONES!”

One day we walked in to the machine blinking. On the other end Gary Kurfirst laughed. “I’m not one of the Ramones but I manage them, and we’re coming to town." And that was the kind of guy Gary was, too.

You can read plenty elsewhere about his astonishing career as a promoter in 1960s New York, how he introduced reggae to America in the 1970s, his star-studded management company with the aforementioned plus Big Audio Dynamite and Jane’s Addiction. He produced Stop Making Sense and True Stories. His bands made Sire one of the hottest labels of the 1980s, he founded Radioactive Records in the 1990s, and teamed with Chris Blackwell seven years ago.

Gary was coolest to the groupies, and that made him a king in my eyes. Pretty girls were a given to keep the musicians happy, whether they were the Ramones or Peter Frampton. Gary was a pro and he knew the game.

And he had a great sense of humor about it. While taking the Eurythmics and Texas Blondes to dinner at Chuy’s one night in 1983, he reached in his pocket and handed me a roll of quarters. “Get the girls and take Dave [Stewart] to the photo machine.” We did. The strips of four-for-a-quarter photos landed on the Chronicle's cover.

Gary was my employer a couple of times, events chronicled in my "In One Ear" column. Once, when he was looking for places to film Stop Making Sense, I was in Dallas and he instructed me to check out two venues. When Talking Heads decided to film their video for “This Must Be the Place” in the area, I scouted locations for them. I found them a ranch, a very strange looking house, and a tepee. I still have the pay stub from Gary’s Overland company because it was such a momentous occasion to be paid for working with what was then my favorite band in the world.

Talking Heads played the last show of their 1983 tour in Austin. At the hotel the night before, Gary handed me a stack of backstage passes to distribute – 43 of them. He also gave me my own guestlist that was so big, nearly every staffer at the Chronicle attended. “It’s the end of the tour,” he shrugged.

It’s been at least 20 years since Gary Kurfirst and I spoke but we did email one another just a few years back. Reading about his death on Jan. 13 was like a heart punch. I am deeply saddened by his passing, for his kindness and attention when I really didn’t matter made him matter to me. 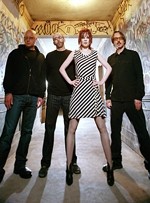 Shirley Manson: Still Mysterious and Delicious
Garbage singer on the industry, Obama, and the animal kingdom