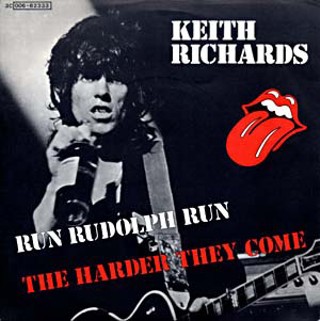 Keith Richards reached retirement age last Thursday, 65, which in musician years equals 325. Tack on another 1,000 in vampire digits. Fortunately, it’s a mere three decades this month that His Holy Riffness put the lash to Rudolph the Red-Nosed Reindeer.

Though generally credited to Chuck Berry, “Run Rudolph Run” wasn’t penned by Richards' maker. Chuck amok made it zing, though, so much so that the seasonal standard assumes his lyrical empiricism. All the more reason, then, that Berry’s Frankenstein – Richards! – should follow in those footsteps by releasing his solo debut a decade prior to his initial X-pensive Winos LP.

Recorded in 1976 as the Rolling Stones shifted through concert material for the following year’s double album Love You Live, “Run Rudolph Run” was cut in London with Richards accompanied by only Ian Stewart on piano and drummer Mike Driscoll, borrowed from ex-Stones six-string razor Mick Taylor. The flip side, a meaty cover of Jimmy Cliff anthem “The Harder They Come,” came to life in Los Angeles two years later, directly after the conclusion of the group’s Some Girls tour in San Francisco. Keith, Ronnie Wood, and Austin’s Ian McLagan began tracking what became Emotional Rescue, at which point the two guitarists plied a bit of their beloved ragga.

Released December 1978, “Run Rudolph Run” wasn’t merely seasonal commercialism either. Considering Richards had miraculously dodged a prison sentence that same October for his Toronto heroin bust a year earlier, the single no doubt served as celebration for a holiday season suddenly much rosier than previously expected. Ten years later, on Dec. 17, 1988 – the day before Richards’ 45th birthday – his X-pensive Winos brought out Chuck Berry’s other musical half, pianist Johnny Johnson, in New Jersey for a rough live rendition of “Run Rudolph Run.”

Richards version makes a ripping comeback as opener of Christmas A Go-Go, minted by Little Steven’s Wicked Cool label. Bob Seger gravels his own best James Brown on “Sock It to Me Santa,” followed by the Ramones’ softcore “Merry Christmas (I Don’t Want to Fight Tonight”), but the latter two leaders sound like Big Crosby the minute Darlene Love and Bruce Springsteen’s E Streeters ring Phil Spector sleigh bells on soul storm “All Alone on Christmas.” The comp puts some English on its spin with early trio the Len Price 3, Roy Wood, and the “Fab Four” mashing up “Norwegian Wood” and George Harrison on “Silent Night,” but once it hits a bad patch of kitsch with Brian Setzer skidding into Soupy Sales and Joe Pesci the Go-Go turns went-went.

X-pensive Winos beat master Steve Jordan produced Los Lonely Boys’ 2008 album, Forgiven, and his river deep/mountain high touch echoes throughout the San Angelo trio’s self-produced (with Manny Marroquin) Christmas Spirit (Epic). Kicking off with a pair of originals Chicano soul enough to have been off Forgiven, the new platter peaks with the Garza brothers’ version of “Run Rudolph Run” setting up Mark and Rick Del Castillo adding 12 more stings to “Carol of the Bells.” After that the usual suspects range from nodding asleep (“Rudolph the Red-Nosed Reindeer”) to nodding in time (“Santa Claus is Coming to Town”), the line mostly invisible. Brotherly harmonies (“Away in the Manger”) best an SRV version of “Feliz Navidad,” before Christmas Spirit wraps on its strongest note, a midnight clear instrumental of “Silent Night.”

The Brian Setzer Orchestra offers two configurations of Christmas cheer for Surfdog Records: Christmas Rocks! The Best of Collection corrals 20 tracks, while The Ultimate Christmas Collection features the same line up with a bonus DVD and green cover not red. Instrumentally, Setzer pulls it off via a seven-minute “Nutcracker Suite” and needle point “My Favorite Things.” Too often, though, the match of his world class voice and roasted chestnuts never translates off the paper it was scrawled on, “You’re a Mean One, Mr. Grinch” begging for serious goose bumps but getting only ham.

The guitarist comes off too cool to really commit on hackneyed fair (“Winter Wonderland,” “White Christmas,” “Santa Claus is Coming to Town”), on which the arrangements do most of the work. One of Setzer’s better turns occurs on “Baby, It’s Cold Outside,” a duet with former Elvis gal Ann Margaret. Since his whole shtick is predicated on Elvis, he brings sincere effort to the song, same as to the unlikely ukulele ditty “Christmas Island.” And when it works, as it does on his hot-rod original “Getting’ In the Mood (for Christmas)” those chills ripple like the heyday of the Stray Cats.

The Jekyll & Hyde nature of the endeavor rears both heads on two closing instrumentals, “Bach’s Bounce” landing on the queso side of hooked-on-Johann, while the horn-driven adaptation of “God Rest Ye Merry Gentleman” harvests James Bond. The corresponding 100-minute live holiday performance on DVD restores Stray Cat edits from the Christmas audio, “Gene and Eddy,” “Rock This Town,” and “Rumble in Brighton” stepping out of the seasonal straight jacket and into the full house for some hollow body sparklers. Setzer’s version of “Run Rudolph Run,” duck walking in a trio format over the fiery coals of rockabilly that made him famous, comes midway though the set – just in the St. Nick of time!