Cigarette dangling from his lips, Phil Rudd exuded the get-it-over-with air of a bored revolutionary at his own firing squad as he plodded ever steam press Friday night at San Antonio’s sold-out AT&T Center. “Back in Black,” “Big Jack,” “Dirty Deeds Done Dirt Cheap,” “Thunderstuck,” all in row; the beat never wavered through the first half of the 90-minute main set. Big bad beat for the former Aussie quintet since 1974 – with a dozen-year lay-off beginning in the early 1980s – Rudd defines the band’s primordial hard rock almost as much as guitarists Malcolm and Angus Young.

Black Ice, AC/DC’s latest, becomes metronomic in Rudd’s sticks, and live, five new songs, including album and show opener “Rock and Roll Train,” the title track, and “War Machine,” came to life at the same pace, only with a live bristle. (No “Spoiling for a Fight”?) Two-thirds of the way through the show, as “Hells Bells” gave way to its LP backer “Shoot to Thrill,” the pace quickened, but Rudd's tempo on the latter was off. “The Jack” just previous, more leaden bash. Rhythm wraith Malcolm Young, at his customary spot left of the drum riser, finally has his group right where he’s always wanted it.

This spring’s easily devoured AC/DC Maximum Rock & Roll spelled out that which makes its subject one of the Olympian gods of classic rock: Malcolm’s absolute abhorrence for anything musically outside of Rudd’s protean bash, brother Angus’ lava-flow leads, Brian Johnson’s belly screech, Cliff Williams’ bass, and even his own trademark grip on AC/DC, rhythmically and dictatorially. Except for enormous stage props – the titanic train engine atop the stage, vintage “Hell’s Bell,” and the six canons’ 30-gun salute on concert closer “For Those About to Rock” – AC/DC has streamlined its molten blues to the barest essentials, a bar band of global proportions.

“Hell Ain’t a Bad Place to Be,” in the number two slot, rammed home the point as hundreds of battery-operated red devil horns flickered throughout the arena on the heads of Angus worshipers. Brand new pop top “Anything Goes” segued perfectly into “You Shook Me All Night Long” before roaring finish “TNT,” “Whole Lotta Rosie,” and “Let There Be Rock.” By the time “Highway to Hell” rolled first in the two-tune encore, flames broiling the band’s video backdrop matched the sonic heat trapped inside the AT&T Center. If AC/DC has paired down its performances to a sleek minimum, the steely fivesome still make up for it with swaggering, workmanlike intensity. Johnson, 61, demonstrated considerably more vocal range than he did here in 1996 at the Frank Erwin Center for the Ballbreaker tour.

Angus, 53, has slowed down since then, but he remains the center of AC/DC’s universe, his strangled cry at the end of “Dirty Deeds” multiplied a thousandfold instrumentally on extended workouts of “Whole Lotta Rosie” and “Let There Be Rock.” Whether 20 feet in the air on the satellite stage riser, or perched above Rudd’s kit as the group headed into its victory lap, Young’s bad boy boogie isn’t as physically wearing and tearing as it has been for decades, but the diminutive lead guitarist’s lightning strike capabilities still outstrip (nice briefs, Ang) most of his blues era peers in terms of speed and historical amalgamation. The “Highway to Hell” remains paved on AC/DC’s bad intentions. Sell your soul Jan. 23 at Dallas’ American Airlines Center. 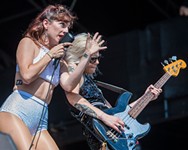 Live Shot: Thunderpussy
When they write their “Thunderstruck,” ladies will be golden