It’s been a tough year for Kanye West. The Chicago producer/rapper lost his mother, the influential figure immortalized on Late Registration’s “Hey Mama,” and parted ways with his fiancée. Hardly the track you want to be on when attempting world pop domination.

The result of the aforementioned hardships sets 808s & Heartbreak (Roc-A-Fella/Def Jam), Kanye’s fourth album, in stark contrast to his previous three’s charismatic cynicism. Gone are the fresh racial examinations hammered home on The College Dropout’s “All Falls Down” and Windy City representing from last year’s “Homecoming.” He’s not making skits about fraternities this round; he’s off the college tip. This time it’s all about Kanye, music’s latest addition to the group of artists publicly struggling with their own fame.

He wrestles with this take on success by examining the hard truths of his loneliness: “On lonely nights I start to fade, her love’s a thousand miles away” he says on “Coldest Winter.” He asks, “Didn’t you know I was waiting on you? My face turned to stone when I heard the news that you decided to break the rules” on “Bad News.”

Women raised Kanye, and he's spent the past year losing the ones he's turned to since The College Dropout made him this futuristic, sunglass-wearing, Louis Vitton-styling dude the public knows him as. “So keep your love lockdown,” he pleads with the listener, but Kanye’s forgetting one thing: His audience has never taken seriously his guilt. His first albums were about the jams they offered: “Good Life” “Through the Wire,” “Touch the Sky,” and “Get Em High.” Fans weren’t rushing to right West African human rights practices after he and Jay-Z ripped through “Diamonds from Sierra Leone.”

On 808s & Heartbreak, Kanye tries to bridge hip-hop’s foundations with defeated sadness and settles on emo. His most hip-hopped inclusion, the rhythmically progressive “Heartless,” is really R&B without the soul, an omission only made worse by West’s use of T-Pain-styled auto-tuning. It’s a device Kanye uses the way a kid uses training wheels. The guy can’t sing. He’s hollow on “Coldest Winter,” unconvincing on “Welcome to the Heartbreak.” His unimaginative lead to “See You In My Nightmares” stands no chance against Lil Wayne’s winding chaos.

Just as glaring is the omission of sampling. Scratches of Curtis Mayfield have no place in Heartbreak. Kanye’s too bummed to move forward, so he recedes. West mixes synthesizers over ancient Roland TR-808 beats more 1988 than 2008, incessantly simple and surprisingly sluggish – a combination that makes every outro sound too long and every hook anti-climactic. Tracks are put together with too much weight on the programmer’s shoulders. Driving rhythms are stagnated by morose piano (“Bad News”); dance tunes turn into “Paranoid” sidesteps.

But it’s an honorable failure. 808s & Heartbreak may have been put together quickly, but it doesn’t sound rushed. It simply sounds one-dimensional. There’s no doubt the mogul is psychologically far removed from where he was a year ago. 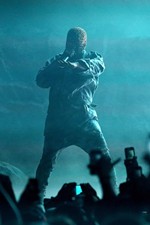