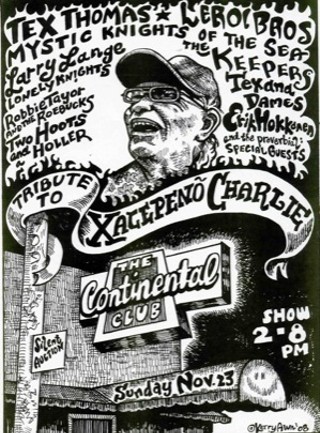 If you're really old a-school Austin and don’t mind admitting it, you may remember I wrote the Chronicle’s first gossip column. We hit the newsstands every other week in those days at a whopping 24 pages. Making a deadline every two weeks shouldn’t have been a problem. Ah, but I was still in my 20s with the 24-7 party hat on and whenever Xalapeno Charlie threw one of his famous Mount Gay Rum parties, I answered the call. When I blamed him in print for missing deadline, he responded with, “I resemble that remark.”

Xalapeno Charlie was the sly, party hearty, gravel-voiced restaurateur from the popular eating establishment of the same name. The first was on South First, then moved to Barton Springs Road. It was a favorite eatery not only for the good company and high profile customers – most of the musicians in town worked or ate there, it seemed – but the four-alarm enchiladas were guaranteed to grow hair in places you didn’t know you had. It’s fairly safe to say that wherever the party in the 1980s and 1990s, Xalapeno Charlie was on the scene.

How all those wild nights will affect your life 25 years down the way is never on your mind at that age. It wasn’t on mine back then, what with my fondness for Mexican beer and cocaine, and a speed habit I quit in 1984 and paid for with hepatitis C in 2005. For Charlie, "still alive and ornery" as the Continental Club's Dianne Scott says, the toll on his health has been devastating, rendering him unable to work

That’s a situation his friends won’t stand for.

From 2-8pm this Sunday, Nov. 23, the Continental Club opens its doors for a tribute to Xalapeno Charlie with a lineup so nostalgically eclectic I craved XC’s famous Sour Creamy Dip. There's Tex Thomas & the Dangling Wranglers, the LeRoi Bros., a rare appearance by the Mystic Knights of the Sea, Larry Lange & the Lonely Knights, Two Hoots & a Holler wih Ricky Broussard, the Texana Dames, Erik Hokkanen, Brad Brobisky & the Keepers, and all the way from the fish-camps of Louisiana, Robbie Taylor & the Roebucks. In addition, a silent auction will help raise money for XC’s medical expenses.

This is where the definition gets sticky of who qualifies for musician services such as HAAM. Xalapeno Charlie isn't a musician, but he personally supported an accountable portion of the music scene for many years, and was generous with food for those who had empty pockets. If a HAAM-like organization existed for the support ranks of Austin arts communities, Charlie’s friends might not be doing this.

On the other hand, if medical insurance and treatment weren’t so outrageously overpriced ……