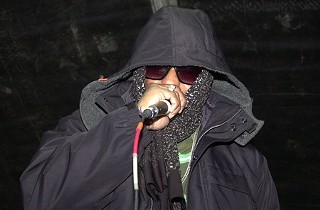 Kool Keith peered through dark sunglasses, his entire head wrapped in a scarf, and it all made sense. Okay, it didn’t exactly make sense but he did talk about the Michael Jackson-like getup he wore Sunday night at Fun Fun Fun Fest when we spoke by phone a couple weeks ago.

“I’m not a person that wants to be revealed,” Keith explained. “I’m worse than Prince. I don’t even want to show my glasses. I wear a scarf over my whole head. I perform with a whole body covering. I’m not in to revealing myself all the time. I don’t need to go on the BET Awards and wave my hand for five minutes. I’ll go out there with a whole scarf around my body. I’ll be like a woman, an unrevealed person in Afghanistan. I’ll cover my eyes and look through a little hole. People just have to hear me, they don’t have to see me at all. At the shows they take pictures of me and the camera is taking my soul every time they snap a shot. I don’t even wear the same clothes after a show. I feel like they were captured on somebody’s camera so I throw the clothes away. My energy is snatched. That’s why I wear a scarf now, like an Afghanistan scarf. A lot of people want to be on television. They want to be stars but stars are not to be seen because you can’t see that far away. The image is not the power, the voice is the power. I’m gonna do my next couple albums in the future without being seen. I want to do a whole album and call it invisible. No pictures or nothing written – just cardboard and a CD.”

Keith also revealed his thoughts on pressing issues, like the state of female undergarments:

“Women nowadays want to wear sweatpants every day and regular K-Mart underwear and think that you’re supposed to be sexually attracted to that. I mean, go out and try to enhance your lingerie closet. Go out and buy some underwear that entices! Go buy some nice garments! Buy some color - don’t always buy black lingerie. A lot of people buy red lingerie but that looks too much like Valentine’s Day. It looks corny. You know, add some other colors. In London and Europe girls spend a little more on their underwear. In the U.S. women go into the 99 Cent store and just grab some funny looking underwear. They don’t care.”

And how the game has changed:

“I remember back in ’88 the dressing rooms were fly and the clubs were fly. Clubs had nice speakers, new mics, and there was recreation before the show. The hospitality rate was higher in 1988. Promoters would take you out to meet some girls or introduce you to their cousin, take you to dinner at a nice restaurant and put you up in five-star hotels. Now the promoters have changed. They became cheaper. They don’t understand the hospitableness to a star. They have dirty dressing rooms and a more boring setting; they put you in a cheap hotel. A lot of groups now have sold out and messed up the game by bowing down to that bullshit. I don’t do that. I fight for better things when I’m out on the road. I stay in the best hotels. I don’t come in a van and I don’t sleep with 20 people on the floor. Just cause you’re underground doesn’t mean you have to eat a bologna sandwich. I stay in five-stars hotels!”

And the secret to his success:

“Good rappers listen to all the rappers. If you’re a closed minded rapper, you don’t listen to nobody. But I listen to all rappers and that makes me even more perfect. I don’t admire every rapper but I listen to every rapper. I’m really beyond rap right now. I’m beyond what rap is. There are rappers out there intimidated by my image, intimidated by my flows. They can’t get with my vocabulary and my spittin’ level. It’s too much. I’m on a higher level. The only rapper I respect out there is Puffy. He sounds the best to me and everybody else is straight garbage. I just listen to Puffy and I throw everybody else’s CDs out the window. He’s the only one I want to do a record with.”

“I walk around the hood. I’m like a ghost. They call me the ghetto ghost cause I walk around and pop up places where people think I might not be. I might be in a dangerous neighborhood where somebody got shot up a couple days ago. I’m Bela Lugosi. Bela Lugosi is the guy you don’t think is doing nothing. People sleep on him, they don’t know if he left the building or not.

“I hear a lot of people talking about the streets. What streets are they talking about? There are no streets. I respect someone who says, ‘I’m coming out of the Wal-Mart with the shopping cart, and I'm gonna tear you apart!’ If you want to talk about K-Mart, Motel 6, and the Waffle House, then we might have a record. I go to the projects.

“Did I mention that there are a lot of guys that copy me? Everybody is trying to be future now. I was the first guy. A lot of different groups are trying to be different by force of a record company, not by natural. I’m gonna put in my Puffy tape and press play and chill until I hear something that’s ill. I am a skilled rapper, one of the best out there.”