The highs and lows of Voodoo Fest 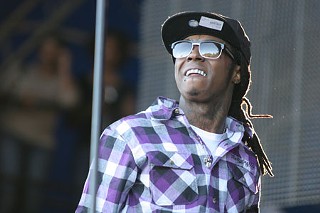 We'd been waiting for Lil Wayne to take the stage for 20 minutes when the big screen above the stage finally found him. A camera followed him walking with his crew from a car, across the field backstage, and to the side of the stage, where he made the sign of the cross and gave himself a pep talk. He was like a boxer getting ready for a fight, or maybe he was just anticipating the adoration of his hometown.

The crowd at Voodoo Fest in New Orleans Saturday afternoon was certainly happy to see him, and Weezy F. Baby responded by putting on a SHOW. When he sang "Lollipop," a parade of high school girls jumped up and down like they were at a slumber party prank calling a boy. Grown men danced like they were auditioning for House Party 2. Weezy just smiled his metallic grin.

He is not an attractive man – in fact, he really does look like a lizard crossed with an alien – but there is nonetheless something magnetic about him and his Bayou flow. It was mainly just him commandeering the stage, and he took his time with Carter III material, as well as talking extensively to the ladies in the crowd and asking God to "watch over my new son I just had the other day." By the time he closed with "A Milli," he had taken out his ponytail and ripped off his shirt.

The rest of the fest was a bit of a hodgepodge. There was the early 1990s reunion train – Stone Temple Pilots' Friday night headlining slot was a head-scratcher, but singer Scott Weiland was certainly in "good" spirits and a majority of the crowd still amazingly knew the words to their songs. The next night, Shudder to Think played a blistering set to roughly 50 people, and Sunday the Butthole Surfers blew open the tent stage.

New Orleans history was represented in a Friday night tribute to Sister Gertrude Morgan, a NOLA jazz singer who passed away in 1980. Philly DJ King Britt took the masters from Morgan's 1972 album, recorded live at Preservation Hall, and mixed it down for a 2005 CD, and live the breaks and gospel blend sounded amazing as he was joined by members of the Preservation Hall Jazz Band.

And, OK, I admit Nine Inch Nails' Saturday night set was pretty spectacular, especially the instrumental half where they got all krautrock.

I still don't understand the Ghostland Observatory phenomenon, but if Aaron Behrens and Mars Volta's Cedric Bixler-Zavala were ever to hit high notes simultaneously, it would be like that scene in Scanners. 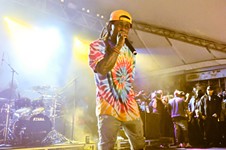