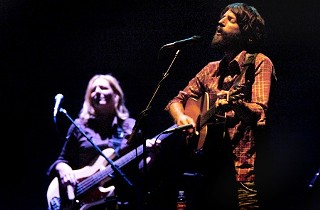 There’s no denying Ray LaMontagne’s fervent fanbase here in Austin, at least as evidenced by his show Saturday night at the Paramount Theatre. In fact, the audience was so enthusiastic it created an odd disconnect between LaMontagne on stage and the adoring shouts from the seats. For his part, the songwriter seemed intent on making the show a formal, distant affair, rarely acknowledging the cries from the crowd, though that did little to quell the spirits of the shrieking girls and equally smitten guys.

Drawn across the stage in a semi-circle, his backing quintet opened the show with "You Are the Best Thing" from LaMontagne’s latest, Gossip in the Grain. Unfortunately, the strings and horns that lift Gossip with fuller arrangements were missing, but LaMontagne hardly needed the boost to inspire. The crowd screamed upon the first notes of most songs in ecstasy, the soft pull of “Hold You in My Arms” and “Let It Be Me” delivered in breathless quivers. The languid steel guitar added a haunted, ethereal air to “I Still Care for You” and “Empty.”

The band was finally allowed to open up a bit more with “Henry Nearly Killed Me (It’s a Shame),” rolling behind howling harmonica, and the accordion-backed “Narrow Escape." Still, the draw of LaMontagne’s music is his mesmerizing voice, which can embody tender loving missives with utter disillusion and heartbreak in each note. Even a song as playful “Meg White,” appropriately set to a red-draped backdrop cut by the white spotlights, bends between these strains of desperation and adoration. Relieved of his band to play a solo interlude, “Burn” caught that tension best, each line spilled an aching sincerity as if it were ripping him apart.

LaMontagne closed out the set with a trifecta of favorites – “You Can Bring Me Flowers,” “Shelter,” and “Trouble” – but the crowd had to wait until the encore for the two most shouted requests of the night. He unloaded “Three More Days” with a smooth bluesy roll that left the entire back half of the theater standing through the entire song, while the soft drop into a solo “Jolene” was accented by the low, subtle hiss of the crowd singing softly along and closer “All the Wild Horses” was eviscerating. 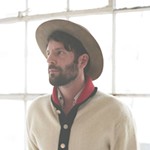