The treasures of the Danny Roy Young tribute 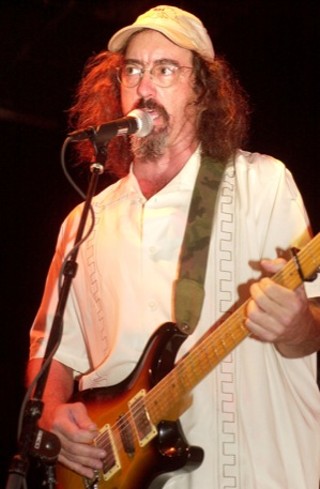 The last time I saw the Texicalli Grille chairs I was probably sitting in one, eating a chicken fried steak and jawing with the late Danny Roy Young. Danny wasn’t just the owner and proprietor of the restaurant, he was a side dish that came with everything. With every order, you got a friendly handshake, a heaping helping of his warm smile, good conversation, and the sense that even if everything wasn’t right in the world, it was all right in the Texicalli.

Those chairs were lined up for the auction upstairs at the Austin Music Hall tribute to Danny on Sunday night, decorated with raffia bows. They reminded me of old footage I once saw of sad-eyed children in an orphanage lined up to be adopted. The chairs looked at me mournfully, as if to say “We’re a family, don’t break us up!” Okay, they didn’t look at me and I am anthropomorphizing them, but they did seem so vulnerable and out of place. Not so with the dozens of posters, photos, memorabilia, and other items in the silent auction.

It was James McMurtry who got to me the most. Each of the three or four times I’ve seen him lately, he gets better but something about the Sunday show was different. It was an abbreviated set, not the kind he’s used to performing, yet he was succinct magic. Is there a better songwriter around right now than James McMurtry? Sure. Maybe. For my money, though, he’s the best of the current breed, steeped in Texas lore and mythology, a musician with a knack for memorable melody, and a singer whose laconic, sensual voice is like your lover’s lips brushing against your neck. Oh, and the heart and soul of a true folkie, one who understands the politics of lyrics. I didn’t want him to end.

One of those little orphan chairs now resides in my kitchen, fitting nicely with the hodgepodge already there. I like to think this means that anytime I want, I can go in and visit with Danny. And no matter what I’m cooking, he’s there.