Gregg Gillis, better known as Girl Talk, reinvented the mash-up with his 2006 copyright-challenging masterpiece, Night Ripper. The 42-minute mix encapsulates nearly as many years of Top 40 radio, reducing and warping hundreds of samples into a linear and fluid progression of spastic glitch-pop, topped with some of the raunchiest a capella verses ever laid to tape. There’s never a dull moment or a chance to catch your breath. In fact, it can be quite the sensory overload on first listen.

What intrigues me about Night Ripper is not only what the music seemed to symbolize on a philosophical level – mirroring the pace of modern media while mocking our disposable consumer-driven culture – but the way in which the mash-ups simultaneously create and manipulate the process of emergence characterized by Gestalt.

Essentially, Gillis develops an extremely complex entity out of relatively simple parts, creating two levels of description – the global level of the whole and the particular level of each individual sample – that support each other and cannot be distinguished from one another. It’s this dual experience that raises his music above the novelty that defines much of the over-saturated genre. The listener’s recognition of the manipulated source material is but one part of the overall experience.

“That’s the way the flow of information in our society works,” Gillis conceded before South by Southwest 2007. “You build upon previous experience. It allows the music to work a lot of different levels and angles.”

Girl Talk’s latest, Feed the Animals, should trigger at least a few Pavlovian responses tonight at a sold-out Emo’s. Remix partner-in-crime Hearts of Darkness and Grand Buffet get the party started. I had the chance to chat with Gillis again earlier this summer at Lollapalooza.

Off the Record: Do you make a new mix for every show?

Gregg Gillis: It’s all live sample triggering. It takes me a long time to put it together. All of them are related, but it slowly evolves as I change little bits and pieces. How I perform it is different every time. I have enough material where I kind of jump around a little bit.

OTR: How does the show material progress into a new album? How do you know when it is ready?

GG: Every album is almost like a documentation of that era of live shows. You try to capture the small ideas you came up with. A lot of people started coming to me with bootlegs of the live show and were saying they even enjoyed the live show more than the last album. It just hit me eventually. I knew it was time to start editing this down into a full album.

OTR: You released Feed the Animals with a pay-what-you-will plan that included a brief survey for the consumers’ reasoning. Have you seen the survey statistics?

GG: I wish, man. I need to call the record label guy immediately. I know most people download it for free, obviously that’s the way it’s gonna be. I think most people said that they either didn’t have money or they were gonna pay later. The pay later thing is, more or less, people making themselves feeling good about taking something for free, and maybe lying to themselves, which I have no problem with. There was even an option for "I don’t like Girl Talk," and that had a pretty significant following. I don’t know if people were joking.

OTR: You sample Roy Orbison, Nirvana, and Jimi Hendrix on Feed the Animals. Is nothing sacred?

GG: I’m 26. I grew up heavily into Nirvana, so if there was anything sacred to me, it would be that. I’ve mangled so many Nirvana songs at this point. Occasionally, I even do a Nirvana cover song at the end of my set even though my vocals aren’t the best. Nothing is sacred to me. Everyone is influenced by their favorite bands and they take pieces of that and try to reinterpret those ideas into something new. Nirvana was influenced by Sonic Youth, by the Pixies. Why should I not grab everything I can and everything I am influenced by?

OTR: How do you find your source material?

GG: A lot of it is just pop music, and it hits me as soon as I hear it. I’ve been doing this for eight years so it’s hard to think of new things to sample, but things become obvious. A lot of times just listening to music on the radio, in a supermarket, at a party, or at a bar, all of a sudden a song comes on and you hear an individual part and I am always like, "Why didn’t I think of that before?" Then I text myself. It’s a trial and error process for me. I sample as much as I can and go through the pieces and eventually I get that straight four block that makes it all work, like Tetris. 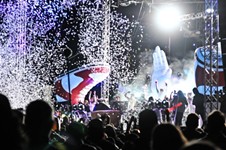