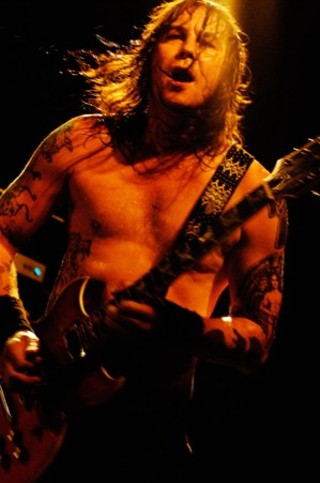 The bands, Opeth, High on Fire, and Baroness, were proven commodity: Molten with a capital Mt. Vesuvius. The venue, Monarch Event Center in central Austin’s Lincoln Village (across the street from the Galaxy Highland 10 cinema), not so much, especially in its first sell-out. At Stubb’s, last night’s Teflon bill magnetizes 1,500-2,000. The Monarch’s largest stage hosts 900-1,000 people comfortably, crisp AC befitting a former multiplex movie theater, and not a bad sight line in the black box with a big hall stage and P.A. custom made for tinnitus. Sound and volume were crippling, acoustics as crystalline as the paper butterflies and beads leftover from a wedding hanging from the ceiling.

Monarch's summer calendar sponsored a half-dozen local indie rock gigs, while recent R&B, blues, and Tejano shows have brought out a local music demographic not limited to predominantly white downloaders. Two more stages, rooms holding 400 and 275, plus an enormous lobby for merch and congregating at the bar under a flat screen stage monitor, not to mention destination parking free and ample, signal sky’s-the-limit potential for the Center, host once again to this winter’s Blue Genie arts bazaar. The christening 8pm-midnight Thursday night tattooed the place in local metal lore same as Opeth at the Back Room on May 9, 2003.

2003 was a Watershed year for Opeth, said new LP a direct descendant of that year’s musical paradigm shift, Damnation, wherein the Stockholm quintet began tempering their blistering prog metal with classically-leavened operatic vocals. The Jekyll & Hyde pairing makes Watershed maddeningly unlistenable, the effect emo: just as volume crests, so does the singer’s sensitivity. In the case of Opeth frontman and constant Mikael Åkerfeldt, the problem isn’t his 100-year-old Cognac croon, a musical weapon of impressive depth. Rather it’s the sweet and sour mixture of Bing Crosby and Cannibal Corpse.

Opening like the fall of Troy, Opeth’s 90-minute headlining set took no prisoners for the first half-hour, the room on 11. Once the band pulled out Damnation’s “Hope Leaves,” however, ballad and bombast undercut each other for the next 45 minutes of momentum-killing stop/start. “Sentimental doom death song” quipped Åkerfeldt about one mid-set selection, but at the end of the night when Opeth once again excised sincerity in favor of sheer brutality, the assembled mass lost its shit. “Deliverance,” title track to the group’s 2003 Hyde half, withered all but the butterflies overhead, a deafening avalanche raining metal retribution. That song alone proved Opeth’s institutional status.

High on Fire gladly plies one speed mostly, and Matt Pike’s Oakland trio galloped to the Hessian beat of 2007’s Relapse Records dominance, Death is This Communion. Though obviously appreciated and roundly applauded, Pike's Fire brigade appeared tolerated only in retrospect once Opeth came on and the audience snapped to attention with a flick of the proverbial switch. Again, Pike’s mighty axe lopped heads happily, Des Kensel’s drums set on kick and bass man Jeff Matz’s instrument tuned to badass, but the night and day reception between High on Fire and Opeth illustrated the room’s allegiance to one act and one act only. Such contrasting degrees of relativity left show starters Baroness exactly where they wanted to pile drive.

Whereas the Savannah-based quartet’s sunderings at Emo’s over the past several years have left all impressed, on a big stage with a stadium P.A. their eponymous Relapse debut from last year shook on par with former labelmates Mastodon covering Phil Lynott. Frontman and visual brand John Dyer Baizley unleashed a bellow to match his Cro-Magnon hair, but the band’s instrumental lockdown took prog out of its four-letter territory into an arena-friendly shuddering of steely, big-boned metal. Baizley and second guitarist Brian Blickle's occasional six-string harmonies lit up distinctly Thin Lizzy, while brother Allen Blickle hammered war drums. Baroness, queen high bitch.