Finding Gold in a Dust Bowl

Jenny Lewis, Bill Murray, and other nuggets from ACL

My friends back East don’t fully get it. “No, it’s a festival that’s pretty much Downtown,” I tell them. “I wake up and eat eggs before I walk down there. I go to sleep in my own bed after a shower.” I imagine their minds circling around some mythical, concrete-jungled Bonnaroo. To the untrained eye, the Austin City Limits Music Festival is a logistical impossibility.

It’s that perception that makes this festival such a treasure. Whereas most festivals take place in no-man’s-lands like Coachella, Calif. and Manchester, Tenn., ACL is just as conversely accessible. It’s not in our city’s backyard; it’s smack-dab in the middle of the damn lawn. Twice in three days I walked out my back door and arrived before I could say Abigail Washburn & the Sparrow Quartet featuring Bela Fleck. No wonder my roommate woke me up Friday morning and said, “This is just like Christmas morning for you, isn’t it?”

This year’s cut offered an esteemed lineup: one guy used to front the Talking Heads; another headed Creedence Clearwater Revival; a third stood at the center of Led Zeppelin; and one guitarist was the beatkeeper in Nirvana. The weekend featured Pharrell Williams and Danger Mouse, two producers doing more to blend hip-hop with rock music than Run-DMC could have ever imagined, and Erykah Badu, the neo-soul movement’s most prolific contributor.

Out-of-towners come as they will - I rapped with three fellow Baltimoreans about the late September heat and shared in some power-to-the-red-headed-people sentiments with an Aussie only referred to as “Ginger” – but this festival is for the people who live in Austin. Parents bring their kids, in strollers and on shoulders. Austin High students duck out of their Friday obligations early to cross that footbridge to paradise, then spend the afternoon looking for their little sister on dad’s shoulders so they know when to hide the pipe.

The food is especially local: Stubb’s grills out only a few booths away from the Salt Lick. Hoffbrau Steaks fights for attention a little more down the line. Sweet Leaf Tea moves out in droves through the park, offering nearly as many free Frisbees and bandannas as they sell Half & Halfs and Pomegranates. And those out-of-towners, the ones walking around looking eerily like I did only a year ago, they get one glimpse of a Frito Pie and start looking for real estate.

ACL’s hardly about the chicken wraps, however – the ones everyone was eating except me because I didn’t know who sold them. It’s about the absolute thrill that Black Keys’ Dan Auerbach must have experienced as he walked on stage, the great John Fogerty’s set just coming to close a sight line away. It’s about Bavu Blakes, on Red River the night before his Saturday set, looking me in the eyes and saying, “I’m ready.” It’s about Erykah Badu shuckin’ and jivin’ with a belly full of baby. It's about the teenage girl going lick for lick with Jason Roberts during Asleep at the Wheel’s Friday afternoon set. It’s about seeing one friend almost brought to tears recounting a Manu Chao set she witnessed in a Chilean gymnasium three years ago and another, a lifelong Beck-head, watch with amazement as the Midnight Vulture slowed “Nicotine & Gravy” to a near halt.

My moment came Saturday night. Without tickets, a friend and I went down to the Parish figuring we’d try our luck getting into the Band of Horses aftershow. As we walked through the downstairs doors, the long-haired ticket-checker was busy telling two women it was a sold-out show. Not a worry. We started talking to the doorman, introduced ourselves. He said he recognized me from another night, from the Devin the Dude show in early August when things got mixed up and I was left off a list I was supposed to be on. I thought I’d made a bad impression that night, but as I sorted out how I was going to apologize to him, he slapped a stamp on my hand and told me to have a good show.

We settled in our usual Parish spot, to the back of the crowd stage left. Halfway through, I felt a tap on my arm. It was Keith, telling me Bill Murray just walked by. Our heads turned as he moved to the back of the bar. Oh man, he’s hanging with Jenny Lewis. We had to get a picture. With her.

Later she walked by, and the 1963-teenage-girl-from-Liverpool in me took over and I just yelled, “Jenny!” With Band of Horses churning out something really, really sublime on stage, she turned around and I said, “Jenny, will you take a picture with me and my buddy? We’re all redheads.” As we gathered for the shot, Jenny offered up the same advice I’d been hearing all my life: “Wear sunscreen. We’re going extinct.” 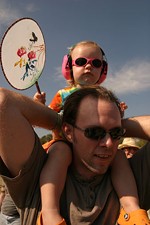 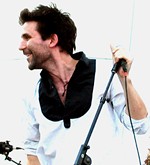